An error has marred the city of New York’s first foray into ranked voting. On Tuesday night, the latest results in the race for mayor were updated after a “discrepancy.”

At around 10:30 p.m., the city’s Board of Elections released a statement noting it had failed to remove images of sample ballots from its ranked-choice voting software after testing it. According to a report from The New York Times, the board said that mistake counted “both test and election night results, producing approximately 135,000 additional records.”

The error announcement immediately threw New Yorkers into a tizzy, with one writing on Twitter: “At this time in our country and you get this s**t wrong??? This gives oxygen to people out there yelling about fraudulent elections. Way to go.”

Ranked-choice voting allows voters to select five candidates on a ballot in preferential order. If no candidate receives 50% of the first-choice votes, there is a process of elimination. The lowest polling candidates are eliminated, and votes from ballots that named them first are reallocated to the candidate their voters ranked next, and so on until there is a winner. 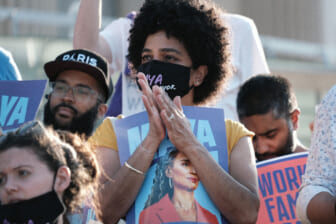 Also Read:
What the Democratic mayoral primary could mean for Black New Yorkers

The final results of the New York City mayoral election are not expected until mid-July.

Brooklyn Borough President Eric Adams was shown with a significant advantage ahead of second-place Times-endorsed candidate Kathryn Garcia, who has an edge over progressive attorney-activist Maya Wiley. The current standing is expected to be updated today. But 124,000 absentee ballots remain to be counted.

“It is critical that New Yorkers are confident in their electoral system, especially as we rank votes in a citywide election for the first time,” he said in a statement Tuesday night. “We appreciate the board’s transparency and acknowledgment of their error. We look forward to the release of an accurate, updated simulation, and the timely conclusion of this critical process.”

Garcia said that the error was “deeply troubling and requires a much more transparent and complete explanation.”

The current totals still show that New York City is set to either have its second African American mayor and either its first Latina or first Black woman at its helm.