The saga continues for Tory Lanez and Megan Thee Stallion. According to a recent TMZ report, the rapper may have violated the “Savage” rapper’s restraining order at the Rolling Loud festival over the weekend.

DaBaby shocked fans when he brought out Lanez during his set on Sunday. The “Rockstar” rapper asked the audience, “I’ll give somebody out here a million dollars if they can guess who in here,” before revealing Lanez.

Fans were quick to point out that DaBaby has a pattern of supporting Lanez, and did so throughout his controversy with Megan Thee Stallion after she accused Lanez of shooting her in the foot.

Now it seems bringing out Lanez may have some serious legal consequences. Megan was also performing at Rolling Loud and Lanez’ appearance could possibly violate the restraining order she has against him.

According to the TMZ report, sources told the outlet that Megan and her team, “were very upset about him appearing on stage with DaBaby less than an hour after she finished her set.”

That’s because a judge issued a protective order following the alleged shooting incident, requiring Tory to stay at least 100 yards away from Megan and she was reportedly still backstage when Lanez performed on stage with DaBaby.

The report also alleged that Megan was not too pleased with DaBaby’s song selection, either. Right before revealing Lanez, DaBaby performed “Cash Sh–“, one of Megan’s songs on which DaBaby is featured.

She felt it was “a giant ‘f you’ to her…mocking her and the ongoing criminal case with Tory and, in a way, menacing her.” The Miami Police Department was reportedly contacted about the possible restraining order violation.

Megan called out DaBaby on Twitter this June surrounding his very public support of Lanez. She wrote in a tweet at the time, “support me in private and publicly do something different…these industry men are very strange. This situation ain’t no damn “beef” and I really wish people would stop down playing it like it’s some internet shit for likes and retweets.”

The tweet lead to an intense back-and-forth between the two rappers, with DaBaby claiming she “let these folks” get the best of her. 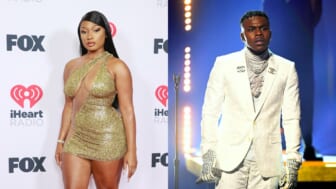 DaBaby’s Rolling Loud performance made headlines for other reasons as well. The rapper went on a homophobic rant that went viral online.

The rapper has received major backlash since it appeared on the internet, with many calling him out for spreading harmful and dangerous rhetoric surrounding the LGBTQ+ community and HIV/AIDS.