Fans immediately called for Lizzo to join the cast of Disney's live-action 'Hercules' after it dropped.

Lizzo is back! The singer made her grand return to music with her new single, “Rumors,” and in its video, she and the song’s featured guest, Cardi B, dress like Greek goddesses.

With the release of her boundary-breaking 2019 and debut album, Cuz I Love You, along with her hit “Truth Hurts” going viral, Lizzo dominated the charts and the culture. Since then, she’s still kept in touch with her fans via her widely-viewed TikTok and Instagram posts, but the pop star has kept a relatively low profile on the music front.

Well, that changed on Friday when Lizzo dropped her latest single, “Rumors,” alongside Cardi B. 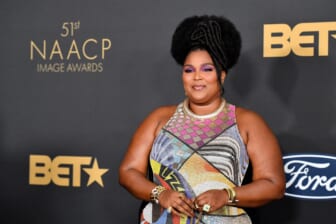 The music video establishes the two as Greek muses, goddesses of the arts. The song is a rapturous expression of self-love and a shout-out to all of the Lizzo and Cardi B haters who spread rumors about them.

“Spendin’ all your time tryna break a woman down / Realer sh-t is goin’ on, baby, take a look around / If you thought that I was ratchet with my a-s hangin’ out / Just wait until the summer when they let me out the house, b-tch,” Lizzo sings in the chorus.

In Cardi’s verse, the rapper addresses plastic surgery rumblings about her head-on: “All the rumors are true, yeah / Fake a-s, fake boobs, yeah / Made a million at Sue’s, yeah / Y’all be runnin’ with fake news, yeah.”

Lizzo has been teasing the release of “Rumors” for weeks now, posting various photos on social media and only just revealing its feature guest earlier this week. She wrote, “New Era b-tch” in her first Instagram post two weeks ago.

When announcing the Cardi feature, she told her followers, “Fun fact: we took this picture right after cardi whispered “I want to eat yo p-ssy” in my ear 🤣🤣🤣🤣🤣🤣🤣 ‘RUMORS’ THIS FRIDAY🤫🔥 YOU READY?”

Twitter has been eating up the women’s fun mythology-themed video, with users immediately praising the singer for referencing the muses in Disney’s popular film, Hercules. One user praising Lizzo wrote, “Lizzo giving us the fat version of The Muses from Hercules made me grin so much my cheeks hurt.”

Others viewed the music video as a perfect “audition” for Lizzo to be cast in Disney’s upcoming live-action remake of Hercules.

Lizzo and Cardi B also took the time to go live on YouTube to connect with fans ahead of the music-video drop. Check out their conversation below.