The 2021 Emmy Awards failed to award any actors of color in its 12 main categories, including all acting fields. 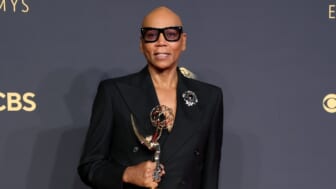 The three-hour-plus ceremony aired Sunday night live from Los Angeles, hosted by comedian Cedric the Entertainer. The Crown and Ted Lasso dominated across the board at the 73rd Annual Primetime Emmys.

RuPaul made history and broke the record as the first person of color with the most Emmy wins. His RuPaul’s Drag Race team took home the award for Outstanding Competition Program. The reality series has bagged a total of 24 Primetime Emmy Awards. RuPaul dedicated Sunday’s win to the LGBTQ community.

“Really thanks to all of our lovely children on our show from all around the world. They’re so gracious to tell their stories of courage how to navigate this difficult life that’s more difficult today,” he said. “For you kids watching, you have a tribe that is waiting for you.”

RuPaul continued: “We are waiting for you, baby. Come on to Mama Ru.”

Michaela Coel, nominated for four Emmys, was honored for Outstanding Writing for a Limited Series for HBO’s I May Destroy You. Coel is the first Black woman to win in the category.

Debbie Allen, recipient of the 2021 Governors Award, reflected on the sexism she faced while coming up in the industry during her acceptance speech.

“I’m trying not to cry and be equal to the situation because it’s been many years in the making,” Allen said. “It takes a lot of courage to be the only woman in the room most of the time. A lot of courage and creativity and fight and faith to believe that I could keep going, and I have and I brought a whole lot of people with me.”

“Attempting to increase diversity by having POC as host and 90% of the presenters, but only giving awards to white folks isn’t a great look for the #Emmys,” Christian Dashiell, the co-host of the TedLassoPod, wrote on Twitter. “The old ‘let’s try to fix our diversity problem without challenging the power structure’ trick.”

The Apple + show Ted Lasso took a number of top prizes, including the lead acting award for its star Jason Sudeikis and Outstanding Comedy series.

“What bothers me the most are the people stating that we should be happy with the host and so many characters and shows being diverse. But if they’re not winning and they are GOOD SHOWS THAT SHOULD what’s the point,” another added. “It’s all performative.”

“So, despite some PHENOMENAL nominees, the emmys basically used black people and poc as window dressing/the help and gave all of the awards to white people,” another user wrote. “DEEP SIGH…just like that juneteenth holiday, it’s all performative, not substantive!”

“I want to thank the Emmys for making it very very very very clear that despite all the sparkly performative diversity, Black awards shows are still very much needed. Especially in the Uk apparently,” user Blaak Richardson added.

The Emmys’ failure to celebrate performers of color sparked the hashtag #EmmySoWhite. Twitter user Brandi Bands wrote, “50% of tonight’s nominees were people of color and Television Academy voters pretty much chose all the white people.”

“It comes with a lot of pressure, being Black, hosting a job like this,” Cedric the Entertainer joked at the top of the show. “My people, they expect that I can just give an award to anybody. Black people like, ‘Yo Ced, come on man, you gotta give Martin Lawrence an Emmy. And not just Martin, Ced, you gotta give Sheneneh one too.’

“Jimmy Kimmel don’t have that problem. He don’t have to give no award to Tony Danza,” the comedian continued.

“The good news is there are a lot of Black people nominated tonight,” Cedric said later. “Like my dawg Anthony Anderson. … This is Anthony’s 11th nomination, but tonight he’s up against Michael Douglas and Ted Lasso. So good luck, partner, but I gotta say, looks like it’s still hard out here for a pimp.”