The trailer offers a preview of candid discussions with stars including Megan Thee Stallion.

Taraji P. Henson is returning to Facebook Watch this month with another season of her Emmy-nominated series, Peace of Mind with Taraji. The 10-episode season will premiere October 11 at 12 p.m. EST, with new episodes dropping weekly, PEOPLE reports.

On this season on Peace of Mind with Taraji, the actress and her co-host Tracie Jade will continue the discussion around mental health issues in the Black community. The duo will also explore topics including gun violence, elite athletics, social media bullying, overcoming adversity, repression of emotion in Black men, domestic violence, and COVID loss.

The trailer offers a preview of their candid discussions with stars including Megan Thee Stallion, Chance the Rapper, Chloe Bailey, Karl Anthony-Towns, and Angela Simmons.

“Mental health is real. I think it’s very, very real,” said Bailey, 23, to which Henson responded, “You really are not alone.”

In the season two premiere, Megan Thee Stallion shares how she has overcome so much adversity in her life to still maintain a positive outlook. The rapper said going to therapy was “never a conversation that was on the table” in her household when growing up.

Chance The Rapper said, “Black men are guarded. Because you have to be.”

The preview also shows Henson opening up about her previous experience with domestic abuse. In her 2016 memoir, Around The Way Girl, she reveals that she broke off her relationship with the father of her son after he allegedly hit her.

“Once the fist came, that’s when I knew I had to go,” Henson said in the trailer.

In her memoir, Henson describes meeting the man she calls “Mark” when she was only 17. They split after a turbulent relationship; while they were separated, Mark fathered babies with two other women. They got back together in the early 1990s, and she became pregnant.

But while Mark was supportive throughout the pregnancy, something changed after their son was born. Things came to a head one evening when an argument turned physical.

“The next thing I knew, Mark’s balled-up fist was coming straight for my face,” Henson said. “I fell onto the bed crying and holding my mouth; blood seeped off my lips and across my teeth. Droplets splashed across my shoes … slowly creeping into the fibers of my suede boots.”

Shocked, Henson screamed at him, “This is over! Get your s— and get out!” 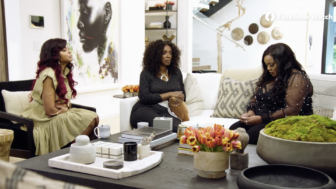 Although her father encouraged her to reconcile with the father of her child, Henson said she couldn’t stay.

“With that separation, my forever man, my first love, was no more.”

Peace of Mind with Taraji premiered in December 2020 and was renewed for a second season in August.

“We knew that it was going to be important. We knew that because when we launched the Boris Lawrence Henson Foundation, we saw that impact on a smaller scale,” Henson told Entertainment Tonight of her series. “So then it amped us up … We were like, ‘Okay, well, how do we get it out to the masses?’ So the show was the natural progression, because only so many people are going to do the research to find us.”

“We have a platform, where people are watching this all over the globe,” she continued. “And what I love about it is, you’re talking to a community of people, Black and brown, who can’t afford therapy. But guess what? Our show is free.”