Anti-vaxxers protest Nets outside Barclays to ‘Stand with Kyrie’

"Kyrie has made a personal choice," Nets General Manager Sean Marks said in benching him, "and we respect his individual right to choose."

A small group of protesters attempted to breach barriers at Barclays Arena in support of Brooklyn Nets guard Kyrie Irving and his decision to remain unvaccinated against COVID-19.

Irving has been benched by his team as New York City mandates prohibit unvaccinated players from participating in home games.

According to CNN, the group of anti-vax demonstrators tried to get to the front of the arena entrance. However, no arrests were made.

“Barclays Center briefly closed its doors today in order to clear protestors from the main doors on the plaza and ensure guests could safely enter the arena,” Mandy Gutmann, a Barclays spokesperson, shared in a statement. “Only ticketed guests were able to enter the building, and the game proceeded according to schedule.”

Protesters held signs reading, “Stand with Kyrie,” and according to CNN, one of them, Savannah Smith, a former New York City teacher, said she didn’t return to work due to the vaccine mandate. “It’s all about choice — that’s what’s going on right now,” she said, noting that she is glad Irving is pushing back against the vaccine mandate.

In benching Irving earlier this month, Nets General Manager Sean Marks said, “Kyrie has made a personal choice, and we respect his individual right to choose. Currently, the choice restricts his ability to be a full-time member of the team, and we will not permit any member of our team to participate with part-time availability.” 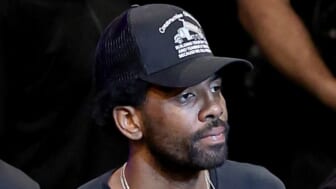 In a video from The Undefeated, the protesters are seen waving American flags and chanting, “Let Kyrie play.”

Sports journalist Jemele Hill, who has been outspoken about Irving’s decision to remain unvaccinated, shared the video, writing, “This is why you always have to pay attention who is lining up behind you. So far for Kyrie, we have Donald Trump Jr, Ted Cruz, and this January 6th energy.”

As previously reported, Hill took to the airwaves on MSNBC to talk about the few current NBA players who remain unvaccinated against COVID-19.

“Because Kyrie is such a thoughtful person, I really want him to look at the bigger picture here. The bigger picture is that this virus has disproportionately impacted his community,” Hill told Nicole Wallace on MSNBC’s Deadline: White House.

“He’s Native American,” Hill said of Irving. “And what the disease has done to Native American indigenous communities is just devastating. The same has happened in the African American community as well.”

“With somebody in a position of leadership and influence, he needs to think about how his message is being received by the people who look up to him, who watch him, who idolize him,” Hill continued. “Everybody that watches Kyrie Irving doesn’t have millions of dollars.”