"I just want to say thank you so much for this opportunity," Moore announced as she departed the show. "This has been a dream come true."

The Real Housewives of Atlanta star Kenya Moore was eliminated from Dancing with the Stars on Monday night’s episode of the reality competition show.

Moore and Armstrong performed an Argentine tango in honor of Arachnophobia, the Frank Marshall-directed 1990 comedy classic starring Jeff Daniels and John Goodman. The film was about an invasion of a rare Venuzeulan spider that takes over a small town.

“I just want to say thank you so much for this opportunity. This has been a dream come true,” Moore, 50, said as she departed. She also told the DWTS judges and cast: “I have so much respect for all of you, and all of you; I love you guys so much!”

Show contestant Iman Shumpert and his dance partner, Daniella Karagach, were the big winners of the night. They gave a stellar performance, inspired by Us, the 2019 Jordan Peele horror film. Their now-viral routine earned a perfect score of 40 out of 40.

Jimmie Allen and partner Emma Slater performed an emotional contemporary dance inspired by A Quiet Place to “Say Something” by Daniel Jang. The performance earned the country singer and his partner a 38 out of 40. 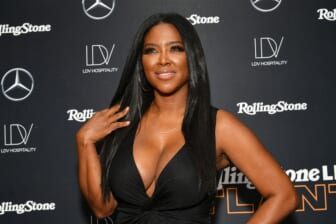 Also Read:
Kenya Moore opens up about ‘Dancing With the Stars,’ breast augmentation

“Beautiful routine, beautiful execution, storytelling,” offered show judge Derek Hough in his critique. “You are always so committed and so authentic to the character that we are all just immersed in it. Thank you so much for that beautiful performance.”

As previously reported, Moore opened up last week in a new interview with theJasmineBRAND, shedding light on this exciting new chapter in her life.

In the conversation, Moore is completely transparent about her body journey, especially after giving birth to daughter Brooklyn Daly. She spoke of her dreams coming true in signing on as a contestant on Dancing With the Stars, as she’s had a lifelong love of dance she credits her late grandmother, Doris, with instilling in her. 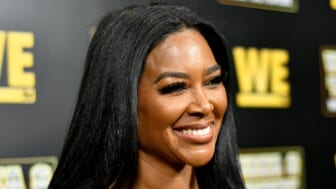 Also Read:
Kenya Moore danced through injury on ‘Dancing With the Stars’ episode

“I’ve watched it from the beginning,” Moore shared. “I used to watch it with my grandmother.”

“If you guys know anything about me, you know that my grandmother raised me since I was like three days old,” said the Detroit native and former Miss USA. “She introduced me to dance. We didn’t have money, so she took us to like this free community center in Detroit … I was about 5 or 6 years old, and when I tell you I have never been happier than dancing. Like I love to dance … but my grandmother’s the one who introduced me to dance, and I have just had a love for it ever since.”

This article features the previous reporting from theGrio’s Jared Alexander.