Niecy Nash and her wife Jessica Betts have made history as the first same-sex couple to cover Essence.

Nash and Betts open up about their love story in the new Essence issue, which hits newsstands March 1, PEOPLE reports.

Betts and Nash tied the knot in August 2020 after first connecting on social media in 2015. At the time, the Claws actress was still married to ex-husband Jay Tucker. Nash and Betts’ friendship turned romantic after her divorce from Tucker in October 2019.

“The least of my attraction is gender,” Nash told the magazine. “What I was and am still attracted to is Jessica’s soul. She was the most beautiful soul I had ever met in my life. Now that I’ve experienced it, I can’t imagine going through life without it.” 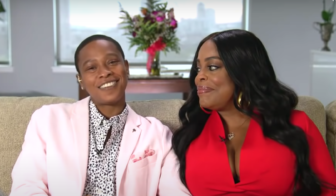 Also Read:
Niecy Nash says she’s ‘never been with a woman before’ meeting wife on ‘RTT’

Nash previously revealed she never had romantic feelings for a woman before Betts.

“Not only was it challenging for me to realize I’m having feelings for a woman that I’ve normally had for a man, but it was compounded by the fact that this is my friend,” Nash explained to Essence, PEOPLE reports. “I thought, ‘What I do not want to do is anything that would allow this person to not be in my life for the rest of my life.'”

When Nash and her wife appeared on a March 2021 episode of  Red Table Talk on Facebook Watch, the actress and comedian shared her children’s reaction to her marriage, theGrio reported.

“My daughters were like, ‘Wait what?’ My youngest daughter, she reminded me, she was like, ‘Wait a minute mom, are you the same mom that was like, ‘Girl, I’m strictly dickly?’ And I was like, ‘Wah, wah. Like yeah, but no.’ ” Nash told hosts Jada Pinkett Smith, Willow Smith and Adrienne Banfield-Norris, adding, “And my son was like, ‘Wooow,’”.

The couple confessed to Essence that they were initially hesitant to display their PDA out of concern about how the public would react.

Also Read:
Niecy Nash wants to ‘make love around the world’ with wife: ‘Break my back over here’

“I feel like the love that I receive from her is custom, as opposed to off the rack. I feel like the assignment happened in the spirit realm before we ever knew about it,” explained Nash.

“It’s to be accepted for the truth of who you are, all the way around, good, bad or indifferent,” she continued. “It’s where someone sees your past, your pain, your bullet holes, your stab wounds, whatever you got in a bag over your shoulder when you show up, and they say, ‘I see it all, and I still love and receive you.'”