Herron, who was integral to getting no-knock warrants banned in Louisville, is Kentucky's first openly LGBTQ state representative.

A former lobbyist with the ACLU of Kentucky who is now its first openly LGBTQ state representative is being honored by USA Today as part of its ongoing “Women of the Year” series.

Keturah Herron was integral to getting no-knock warrants banned in the city of Louisville, Kentucky, following the police killing of 26-year-old emergency medical technician Breonna Taylor in March 2020. Taylor was slain when three Louisville Metropolitan Police officers entered her home with a no-knock warrant that was later found faulty.

Elected to Kentucky’s House of Representatives by special election in February, Herron told The Louisville Courier-Journal that she joined the ACLU in 2019, where she focused mostly on legislation around juvenile justice. Her passion and path shifted after Taylor’s death.

In a conversation with the outlet, Herron described herself as an “abolitionist,” saying, “I think the system we have today does not work. It has never worked. I don’t think it’s going to work.”

She added, “But I also know and understand that we can’t today just say completely tear it down. What are the alternatives? How do we create a society in which we don’t even need this type of carceral system?” 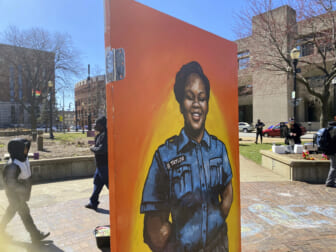 Herron claims the change she most wants to see “is that incarceration is not the main thing that we do in our society.” She instead envisions “a society where people have their basic needs met, that people are not living in poverty,” then American society can greatly change for the better.

After her landslide victory last month, Herron said, “I am honored to be in this position to serve the people of House District 42. I am dedicated to working with the people to bring about the changes they seek in their community. I am taking District 42 with me as we labor together to make a difference in this city and state,” according to WTVQ.

The USA Today “Women of the Year” series followed its 2020 “Women of the Century” project, which recognized the achievements of “trailblazing” women in the centennial anniversary year women won the right to vote. The honorees are chosen from every state, Washington, D.C. and Puerto Rico.

The very first honoree chosen for “Women of the Century” was Vice President Kamala Harris, the first female vice president and the first Black and South Asian person to hold that office.

Girls Inc., a nonprofit organization focused on supporting, mentoring and developing girls and nurturing their strengths, is the official charity beneficiary of this year’s “Women of the Year” program. A $25,000 grant has been issued to Girls Inc. by Gannett, USA Today‘s parent company.