Meghan Markle can relate to being called ‘crazy.’ Can you?

On the latest episode of the "Archetypes" podcast, Meghan Markle and others discuss the consequences of being labeled “crazy.”

Have you ever been called “irrational” or even “crazy” when you were just expressing an emotion? Meghan Markle can relate.

On the latest episode of “Archetypes,” Markle’s podcast with Spotify and Archewell Audio, the Duchess of Sussex and five guests — including former Surgeon General of California Nadine Burke Harris — dive into the centuries-old history of the label “crazy” and the social stigma and systemic consequences the term has created.

“The use of these labels has been drilled into us from movies and TV, from friends and family and even from random strangers,” Markle says in the episode’s introduction. “The fact is, no one wants this label.”

Markle also notes that the term is often applied to a woman who is simply having the human experience of feeling her emotions.

“Let’s just call it what it is — emotions — because that’s it. It’s just the emotional experience of something. Scared, sad, angry, stressed, jealous, surprised, worried, insecure — take your pick,” she says.

Calling someone “crazy” or “hysterical” (Black women may think of the term “aggressive” as well) during an emotional experience is minimizing and damaging, Markle says. These types of labels can lead to a person feeling their experience is being dismissed, she adds.

“It doesn’t stop there,” Markle says. “It keeps going and going to the point where anyone who’s been labeled it enough times can be gaslit into feeling like they’re actually unwell.  Or sometimes worse —  to the point where real issues are ignored.”

This can happen in the workplace when an employee may experience some sort of harassment or abuse at the hands of a superior, as actress Constance Wu explains in the episode. It can also happen in the medical world, according to Burke, citing the example of a doctor or medical professional failing to understand the symptoms of a patient, which in turn can lead to medical gaslighting.

“Even when we look at research in current-day medicine, we see that women are less often believed in terms of their symptoms for things like a heart attack. When women come into a hospital there’s a greater likelihood that their symptoms may not be taken as seriously and that they may not be diagnosed accurately when they’re sharing what they’re going through,” Burke explains. “And I think some of that goes back to this notion of the hysterical woman and the exaggeration of symptoms or the just you know oh she’s crazy and it’s all in her head.”

For decades, researchers have found that women are often viewed as hysterical instead of actually in need of medical intervention when they see a medical professional.

“It took far too long for her to be listened to and it’s like that for so many women, particularly women of color,” Markle says, adding that the stakes behind the stigma of “crazy” are far too high. 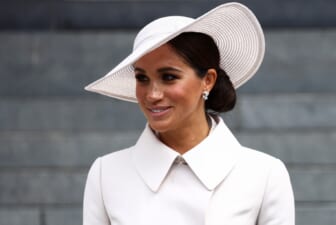 On the podcast, Markle is also joined by comedians Jenny Slate and Aparna Nancherla, who share their experiences of being labeled “crazy” or “hysterical.” Throughout the episode, the women dissect the stigma surrounding the stereotype and the “silencing effect” it can have.

“I think the real harm is the way in which these societal stereotypes lead us to mistrust our own voices,” Burke says.