Rihanna is getting fans ready for her upcoming Super Bowl halftime show performance. She dropped a teaser video for the event on Friday.

The 30-second video begins and builds with overlapping voiceovers of reporters commenting on her lengthy absence from making music. The first voice says “It’s been 2,190 days,” while another says, “it’s been over six years since the nine-time Grammy winner put out her last album.”

Rihanna has not released an album since 2016’s “Anti,” featuring hit singles such as “Work,” “Kiss It Better” and “Love on the Brain.”

Throughout the video, Rihanna, dressed in a black dress, yellow fur, assorted neck jewelry and large gold hoop earrings, poses for the camera amid the growing volume of voiceovers crying out for her to return to music. It ends with a medium close-up of Rihanna putting her index finger to her lips, signaling everyone to be quiet, as the song “Needed Me” plays.

In November, Rihanna released her first song in over six years, “Lift Me Up.” It was part of the soundtrack to Marvel’s “Black Panther: Wakanda Forever.”

Rihanna will perform for the Super Bowl halftime show for the first time on Feb. 12, with Apple Music as the official sponsor. Super Bowl LVII will take place at State Farm Stadium in Glendale, Arizona. The “We Found Love” singer was first announced as the big game’s halftime entertainment in September. 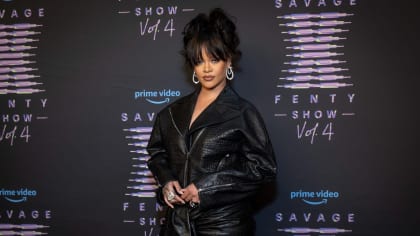 “Rihanna is a generational talent, a woman of humble beginnings who has surpassed expectations at every turn,” Shawn “Jay-Z” Carter, whose Roc Nation is an executive producer of the show, said in a statement. “A person born on the small island of Barbados who became one of the most prominent artists ever. Self-made in business and entertainment.”

In 2019, Rihanna was approached by the NFL to perform at halftime during the Super Bowl. She declined at the time in solidarity with Colin Kaepernick, who was allegedly blackballed from the NFL after kneeling during the national anthem to protest police brutality.