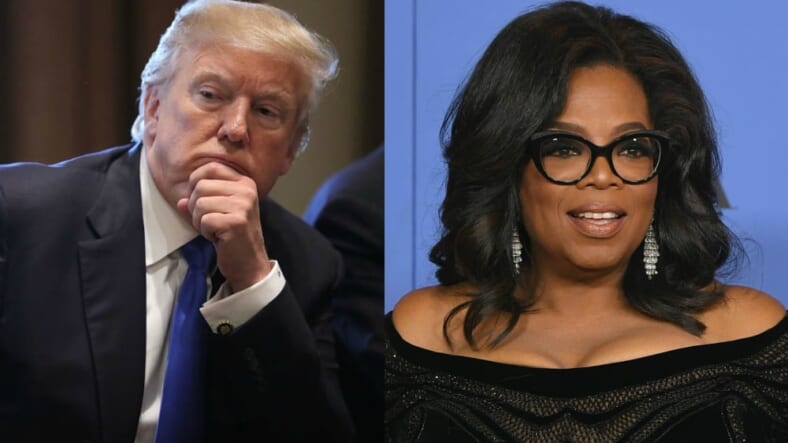 The notoriously thin-skinned and Twitter obsessed president apparently couldn’t take it when Oprah put together a 60 Minutes segment in which she brought together a group of Michigan voters to grade Trump on his first presidential year.

The 60 Minutes segment was a followup to a previous segment, when those same 14 people had come together in 2017. Winfrey, a special correspondent for the iconic news program, talked to voters to get their thoughts and reflections on the president’s first year in office.

–Black Panther Obsessed? How to not get fired after seeing the movie–

“Just watched a very insecure Oprah Winfrey, who at one point I knew very well, interview a panel of people on 60 Minutes,” Trump tweeted from his Mar-a-Lago estate, according to the New York Daily News.

“The questions were biased and slanted, the facts incorrect,” Trump said. “Hope Oprah runs so she can be exposed and defeated just like all of the others!”

Oprah Winfrey has been rumored to be a 2020 presidential contender.

The Queen mother of all things wonderful was reportedly ‘actively thinking’ about running for president, according to CNN’s Brian Stelter.

Two “close friends” of Winfrey told Stelter she had not made a final decision whether to run but has had conversations about it dating back “months.”

Winfrey’s resounding speech during the Golden Globes sent social media into a praise-fest frenzy. She became the first Black woman to receive the prestigious Cecil B. DeMille Award for her contributions to entertainment.

Her speech was equal parts inspiration, Sunday sermon and masterclass for life. It was the exact kind of speech that left you legitimately feeling that she could actually be president.

NBC was briefly caught up in Oprah POTUS-mania, too. The network referred to Winfrey as “our future president” on Twitter during the Golden Globes. NBC later deleted the tweet, claiming it wasn’t intended to be a “political statement.”

After weeks of the country losing its entire mind over the mere possibility, Winfrey broke her silence on all the political fanfare.

“I’ve always felt very secure and confident with myself in knowing what I could do and what I could not. And so it’s not something that interests me,” Winfrey told In Style. “I don’t have the DNA for it.”

Donald Trump’s tweet about Oprah is very different from his initial reaction to the rumors back in January that Oprah would be running. Back then, he took a more measured approach, saying that “Oprah would be a lot of fun.”

“I don’t think she’s going to run,” Trump told reporters during an immigration meeting. “I did one of her last shows … I like Oprah,” he added. “I know her very well.”

–LeBron James to Laura Ingraham: I will not just ‘Shut up and dribble’–

Seeing as Trump reportedly once wanted her for a running mate, it’s no surprise that Oprah had been one of the few people he hadn’t outright attacked.

But that was then, and this is now, and apparently, a 60 Minutes segment is all it takes for Trump to give up on any semblance of decorum to come for Oprah.