The costume illustrator and concept artist for 'A Wrinkle in Time' and 'Black Panther' shares the stunning sketches that shaped the look of Wakanda. 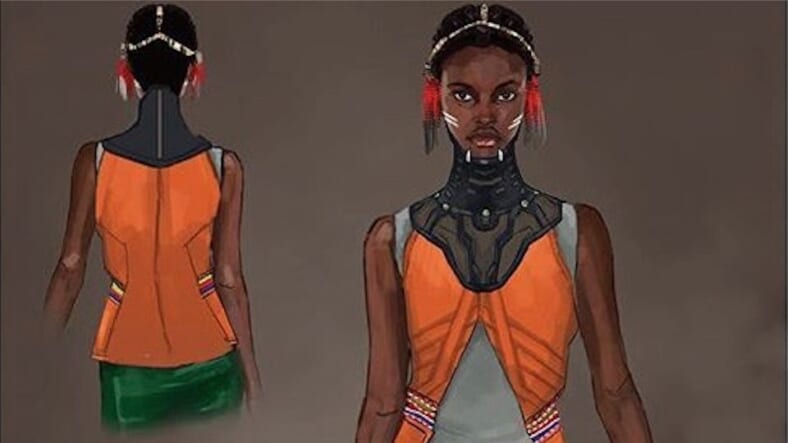 Phillip Boutte, Jr. knows how to make dreams a reality.

As the costume illustrator and concept artist for A Wrinkle in Time, Justice League, and Black Panther, he has helped create the captivating images for these incredible films and his hard work is paying off in a big way.

We caught up with the talented artist to find out how he landed the gig of a lifetime twice in one year and gained insight into how the stunning styles in Black Panther went from concepts to costumes.

“As a costume concept artist, my job is completely supportive. I work with the costume designer and I’m the first strike they have to visually show their ideas. I’m the first pass at the characters,” he explains.

“When I present my illustrations, it’s the first time the actors see what the designer is thinking about. I’m very collaborative. I expand on the concepts or translate their ideas to paper. It’s like being a psychiatrist in a way. My drawings are what the actual costumes are based on.”

When it came time to get to work on Black Panther, Boutte was more than ready to dig in.

“Above all else, we wanted to make sure we were looking at African culture and folding it in to this Marvel world for Black Panther. I got to work with Ruth Carter who is amazing. She brought the culture. Her main priority was to make sure we had historical pieces from various African tribes,” he says.

“The mythology was important. Wakanda in a sense is what would happen to Africa if they had access to all their resources, all of their wealth, and all of the complex fabrics and textiles. It was a place that flourished based on the abundant resources. Wakanda is Africa if it had never been touched by outsiders and allowed to flourish. What would that look like? That idea mixed in with it being like Timbuktu which had all the gold and had the kings and was hard to get to and once you got there you had a really strong military to deal with. That’s Wakanda at it’s core.”

Working on Black Panther has been a career highlight for Boutte, a former child actor who left the industry after being disappointed by the stereotypical roles offered to black men. But little did he know more creative blessings were headed his way.

“Ava actually found me on Twitter. In 2016, I worked with a costume designer who designs for the annual Governer’s Ball for the Academy Awards and he wanted to decorate the ball room to look like The Brown Derby, a restaurant that was famous for having caricatures on the walls. He tasked me with forming a team of nine illustrators to do 25 drawings each for the walls of the event space and one of the ones I did last minute was Ava DuVernay. I wanted to do it because she was not going to attend the Oscars so she could do work for Flint, Michigan’s water crisis. I really loved the fact that she skipped the Oscars to do something real. I felt I needed to draw her because I felt she needed to be represented,” he explains. “I put it up on Twitter and she liked it and she followed me and that was all I needed. The next day, I got a call from producers from Disney who said, ‘Ava DuVernay really likes your work, would you like to come in and meet with her?’ I was hired that day.”

READ MORE: EXCLUSIVE: Kim Kimble On The #BlackGirlMagic Behind ‘A Wrinkle In Time’

Getting the gig was a dream on its own, but Boutte was even more fulfilled by his experience with the award-winning director.

“She’s a force of nature. She’s very kind and patient, but she’s also a leader. It’s hard to explain her energy to people, but when she’s around, you feel like you can do and you will and you have to be great because you see her vision and you know what that means and you recognize she’s making a difference so you feel empowered by her. She’s also very collaborative in the sense that I’ve never worked on a film where I felt so much a part of the team. She asks for your opinions. She’s very inclusive and I felt like she saw me in a way I feel a lot of people miss.”

With Black Panther breaking box-office records and A Wrinkle In Time hitting theaters next month, Boutte can finally sit back and enjoy the fruits of his whirlwind year.

“The fact that I worked on Black Panther and A Wrinkle In Time in the same year was like all my childhood dreams realized. All my prayers answered,” he says. “I have no words. It’s one of the best feelings I have ever had. I couldn’t believe I was a part of these projects.”

Check out the illustrations that formed the foundation of Black Panther‘s amazing aesthetic: