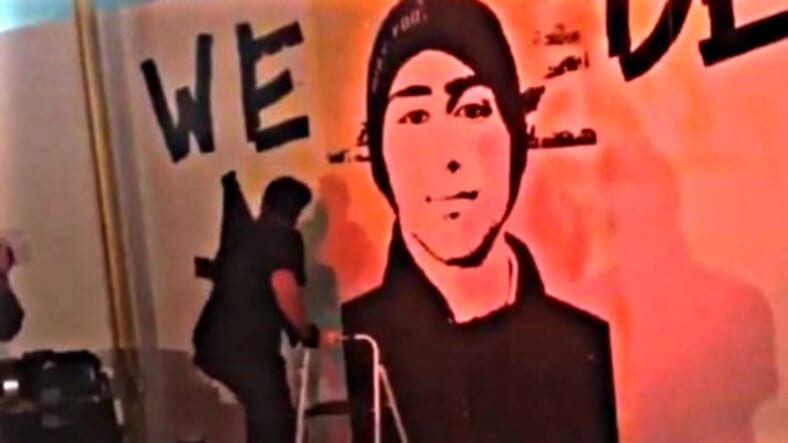 In a heartbreaking video, the father of slain Parkland student Joaquin Oliver, honored his son by painting a mural and calling for change.

Manuel Oliver‘s son and 16 other people were killed by Nikolas Cruz at their high school last month.

The father of Joaquin Oliver is clearly upset as he swipes brushstrokes on a wall which revealed the words: “We Demand A Change” around a painting of Joaquin on Saturday, according to the Huffington Post. The video was captured by one of Joaquin’s former classmates Lex Michael and was part of an exhibit created by artist Evan Pestaina.

Miami Heat NBA star Dwyane Wade organized the event because the 17-year-old Joaquin Oliver was a big fan of his.

Dwayne Wade returned to the Miami Heat just six days before the shooting at Marjory Stoneman Douglas High School in Parkland, Florida on February 14. Little did he know how much of an impact he had already had on one of its victims.

Joaquin Oliver was even buried in Wade’s basketball jersey.

“This is Joaquin Oliver,” Wade wrote on Twitter accompanied with a picture of Oliver. “He was one of the 17 young lives that were lost tragically at Douglas HighSchool in Parkland. Joaquin was one of many that i heard was excited about my return to Miami and yesterday was buried in my jersey. This is why we will not just SHUT up and dribble!”

“I just wanted to come and say I’m inspired by all of you,” Wade told the students as they crowded around him.

The weekend art exhibit is also a catalyst to promote the upcoming March 24 “March For Life” to demand gun control in Washington DC. The rally will be supported by hundreds of affiliate marches held throughout the U.S. and abroad.

After the shooting Oliver founded an organization called Change the Ref to empower youth to press for gun control and other issues.

Young people are not the light at the end of the tunnel, they are “lighting the tunnel right now,” Oliver says in a videotaped message about the organization. “We need to support them. They will choose the right refs [referees] for a fair game so we can have a great nation again.”

The “Parkland 17” weekend installation also included a phone booth where visitors could “Ring Your Rep” to let their legislators know how they feel about gun control, reported CBS Miami.

Anthony Borges was one of the dozens injured on February 14 during the tragic Marjory Stoneman Douglas High School shooting that left 17 people dead.

Now, he and his family are suing the Broward County Sheriff’s Office, the school district, the principal and resource officers of the school. Borges is the first to file a lawsuit, and that number is expected to grow.

The 15-year-old student was struck five times—twice in his right leg, once in his left leg and twice in his torso after reportedly trying to protect 20 of his classmates.

According to the Daily Mail, the lawsuit asserts that more could have been done to prevent the deadly shooting by former student Nikolas Cruz.

“The failure of Broward County Public Schools, and of the principal and school resource officer to adequately protect students, and in particular our client, from life-threatening harm were unreasonable, callous and negligent,” wrote attorney Alex Arreaza in their lawsuit notice. “Such action or inaction led to the personal injuries sustained by my client.”

Borges is still recovering in the hospital and has “a great deal of difficulty performing rudimentary tasks for himself.” He has not yet recovered enough to walk.