Seriously, it's legit a good album. 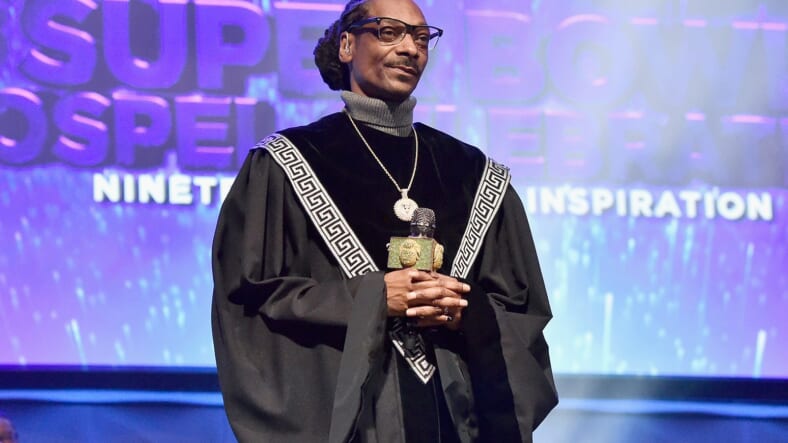 Your mans Calvin “Snoop Dogg” Broadus seems to be continuing with his mid-life identity crisis.

First there was the whole “Snoop Lion” rebranding thing that lasted precisely 26 seconds; dude threw on a rastacap, sparked an even bigger blunt and released a 2013 reggae album, Reincarnated, that apparently did well on Reggae charts but no one you know listened to.

Now there’s Bible of Love, his new gospel album that dropped this past Friday, March 16. That’s right…just a few years after meeting with a Rastafarian priest and having his whole perspective on the world turned upside down, Snoop is Jesus’ favorite Crip again. Saints, rejoice.

Sinners Have Soul Too

It’s worth noting that I’m nobody’s Christian: If there is a Hell, I have a business-class ticket booked there, where a Post-Kim Kanye West will be waiting to talk with me for eternity in the waiting room of a Secretary of State office over bottomless watered-down Amaretto sours.

As such, I don’t listen to gospel music routinely. But there’s no way I’m not going to at least entertain a whole gospel album from one of the godfathers of gangsta rap, if for no other reason than I needed something to Tweet shit about on Monday.

Imagine my surprise when I had Bible of Love playing in the background and actually found myself…legitimately gigging to it. Like, listening to “Pure Gold” by The Clark Sisters had my heathen ass feeling like I really was tried like silver in the fire.

You don’t need to be a believer to appreciate Gospel music – if you’re Black and love Black music, gospel is already part of your makeup. As a youngster, I loved watching my mama’s choir throw down with vocals that literally made the floors vibrate (shout out to Detroit’s Fellowship Chapel).

-Kim Kardashian hates memes comparing Kanye to ‘Get Out’ character–

So, I’m not surprised that I found myself bopping to “Going Home” from Uncle Chucc & The Zion Messengers while stripping a teriyaki-flavored flat from Wing Stop (which might be the Blackest thing anyone did this past Sunday). The music is well-produced and the vocals soar…that’s usually just enough for me.

Guest stars include gospel artists whom even I recognize – The Clark Sisters, Kim Burrell, Fred Hammond – along with secular artists like Daz Dillinger and Jodeci’s K-Ci, whose tenor on “No One Else” reminds us that he belongs in church and not pulling out his junk on stage. Of course, there’s no Parental Advisory sticker to be found – just good, clean gospel.

Snoop himself brings very little to the project vocally, which is a good thing. Jesus might not be so likely to let him C-walk into Heb’m after decades of rapping gleefully about b—–s and hoes for half-assed bars like, “My granny said give us our daily bread/she put it in my heart, now it’s in my head” on “Always Got Something to Say.” The album is more of a compilation – Snoop’s version of Drake’s More Life, but with even less rapping.

It gets deeper when you consider that he just put out an EP, 220, less than a month ago; on the title track he raps, “Run up on a n—- you’ll get popped like a pill, yo.” How can you kill n—-s on one project and devote your life to Jesus on another in the same pay period? I suppose God works on people in His own time, or so I’m told.

If nothing else, Snoop is a consummate businessman. Even though he hasn’t registered a successful mainstream non-feature single since George W. Bush’s first term, his name is always on the tip of folks’ tongues, even if they’re just saying, “Wait, Snoop got another album out?!?”

But Bible of Love might just be that album that gets him back in the favor of the people, albeit not the demographic of people gathering around the “Nuthin’ but a G Thang” video scene where dudes spray the woman with booze against her will. I’ve heard and read a decent amount of praise about Bible of Love, and I’m guessing there’s something on this long-ass album (about the same length as a Marvel film) for even the most discriminate of gospel fans.

I still like saying (and typing) naughty words, following Instagram “models” and I’d rather be eating an omelette covered in Hollandaise sauce on a Sunday than holding my bladder until your auntie’s pastor finally wraps up his service, so I doubt paying for and bumping a Snoop gospel album will get me any closer to those pearly gates.

But I’m always happy to see Uncle Snoop win. Just don’t be surprised if he converts to Judaism next year and puts together that joint album with Matisyahu. Shit’ll be kosher fire.

Good luck with #FreeMeekMill, but I’m not caping for him