Wait until her father finds out. 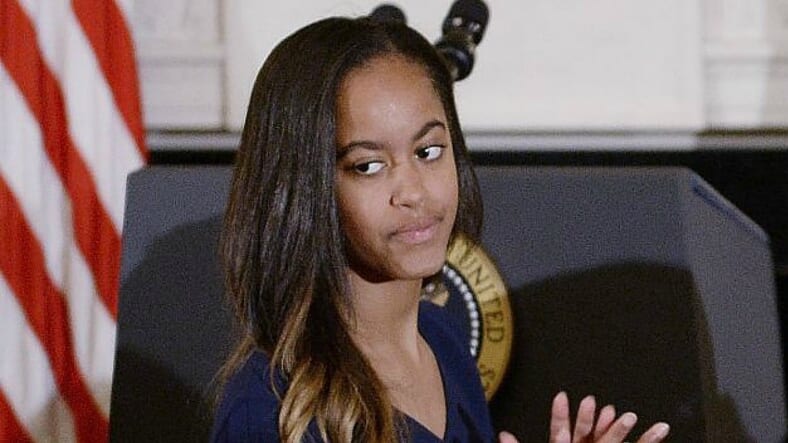 President Obama Gives Tribute To VP Biden In The State Dining Room WASHINGTON, DC – JANUARY 12: (AFP OUT) Malia Obama (L) and Sasha Obama look on durinng a ceremony presenting the Medal of Freedom to Vice-President Joe Biden at the State Dining room of the White House on January 12, 2017 in Washington, DC. (Photo by Olivier Douliery-Pool/Getty Images)

On Monday, the Weinstein Company filed for bankruptcy and within the 394-page document detailing the event, it was also noted that the company has failed to pay some of its former employees, including Malia. In 2017, she worked for the company as an intern.

Back in October 2017, both Barack and Michelle Obama publicly condemned the behavior of Weinstein in a joint statement.

“Any man who demeans and degrades women in such fashion needs to be condemned and held accountable, regardless of wealth or status. We should celebrate the courage of women who have come forward to tell these painful stories. And we all need to build a culture — including by empowering our girls and teaching our boys decency and respect — so we can make such behavior less prevalent in the future.”

Malia previously interned with HBO’s Lena Dunham series “Girls,” and has already added a gig as a production assistant for Halle Berry’s CBS show “Extant” to her resume.

Malia is unfortunately not the only celebrity listed who has yet to be paid by the company. Other big-time Hollywood hitters include Ryan Coogler, Jennifer Lawrence, Robert De Niro, Quentin Tarantino , David Bowie, Michael Bay, Daniel Radcliffe, Seth Rogen, Heidi Klum, and Kevin Smith.

The outstanding amount owed to the aforementioned is unknown. The company filed a rather large amount for liabilities and assets between $500,000,001 and $1 billion. Other claims listed in the petition for bankruptcy are 30 creditors; some of which amount to $17.4 million, $14.4 million, $5.6 million, $1.5 million and more.

One person Weinstein should be happy he doesn’t owe is billionaire, Oprah Winfrey.

On Gwyneth Paltrow’s new podcast, The Goop, Winfrey detailed the truth about her relationship with the man who caused #MeToo to reach new heights.

According to DailyMail, Winfrey also told Paltrow that Weinstein used to try to intimidate her into booking the stars of his films onto her Emmy-winning talk show, “The Oprah Winfrey Show.”

“I’m hoping that it leads to a better way of all human beings treating each other,” Winfrey continued, “and that this moment in the movement is leading us toward saying, ‘Not only am I not going to take your sexual harassment, I’m not going to take any of your bulls–t. Period.’ I think we’re on our way but we’re still figuring it out.”