Does Villanova player Donte DiVincenzo get a pass for dropping n-word tweet? 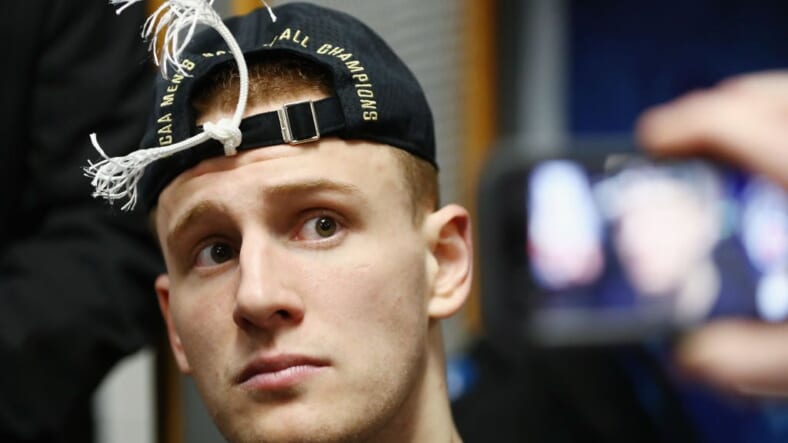 SAN ANTONIO, TX - APRIL 02: Donte DiVincenzo #10 of the Villanova Wildcats speaks to the media in the locker room after defeating the Michigan Wolverines during the 2018 NCAA Men's Final Four National Championship game at the Alamodome on April 2, 2018 in San Antonio, Texas. Villanova defeated Michigan 79-62. (Photo by Ronald Martinez/Getty Images)

Donte DiVincenzo scored 31 points last night to push the Villanova Wildcats to an NCAA basketball championship, but he’s getting an early lesson in how the the spotlight can get hot pretty quickly.

An old tweet resurfaced that shows a teenaged DiVincenzo using the n-word.  The 2011 tweet read “Ballin on these niggas like I’m derrick rose!” That is a line from rapper Meek Mill’s track “Derrick Rose.”

DiVincenzo, who is white, was a 14 year old kid living in his parents’ Delaware home at the time. A reporter asked about the tweet on Monday night, just as the 6’5 guard was being honored as the Most Outstanding Player of the Final Four.

The tweet disappeared right after the reporter asked about it. After the exchange, Villanova officials said that DiVincenzo’s account was hacked. But a 2018 hack does not impact the existence of a 2011 tweet. Villanova has since retracted its statement.

Other tweets also re-emerged—ones in which DiVincenzo used sexually explicit and homophobic language. In 2013, he tweeted a gay slur several times.

The white kid gets caught being offensive on social media story is one we know well. Students from the University of Alabama and Michigan State University are the latest  examples of young people starting off young adulthood in the exact wrong way.

It’s only a matter of time before DiVincenzo and Villanova send out a well-crafted statement to apologize and emphasize that he was a high school student when he sent his offensive tweets into the world.

Do you care about DiVincenzo’s teenage tweets? And what do his Black or LGBT teammates think?