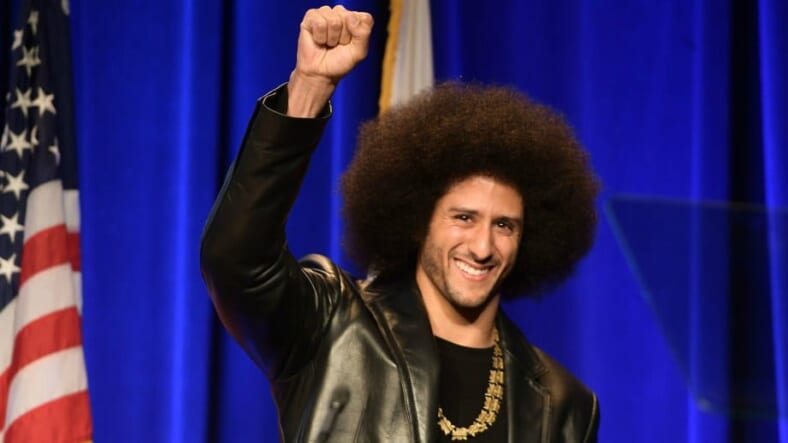 President Donald Trump who once called Colin Kaepernick “a son of a bitch” and said he should get off the field for kneeling during the national anthem and be fired, has now invited him to a “Race Summit” he is organizing.

We’ll just go ahead and answer for Kaep: No thank you.

Darrell Scott, a Cleveland-based pastor and outside adviser to the White House, tells PEOPLE that Trump is bringing together musicians and athletes to discuss race and that it also includes an invite for his new bff rapper Kanye West, who has been singing praises of support for Trump.

“He is 100 percent for it,” says Scott. The pastor said he had a brief conversation with Trump following an outdoor ceremony at the White House for Thursday’s National Day of Prayer. “He was very enthusiastic about it.”

Scott said the summit will be a melting pot of athletes and musical artist and not just a “black-only event.”

It is interesting that a race summit would take place at the White House considering that Trump hasn’t exactly been the brightest beacon of racial unity. Oh, let us count the ways:

Last year Trump complained about allowing Haitians in the country because he said they all have AIDS and said that Nigerians would never return to their “huts.”

He artfully had a bunch of “disparaging words for Haiti and Africa,” calling them sh-thole countries and suggested that the U.S. should bring in more people from places such as Norway instead.

Let’s not forget that last year, he called white nationalists “very fine people” in the wake violence that resulted in a death at their rally in Charlottesville, Virginia.

And when former San Francisco 49er Colin Kaepernick took up the cause of racial injustice and started kneeling during the national anthem at football games, Trump said he should be fired for protesting. His exact words were, “get that son of a b—- off the field right now.” Kaepernick was actually doing the work of trying to bring the races together.

“I think it’s personally (kneeling) not a good thing, I think it’s a terrible thing. And, you know, maybe he should find a country that works better for him. Let him try, it won’t happen.”

So again, what’s the point of the race summit?

“These are guys on the president’s side,” said Scott.

Scott said West is aware of the summit and is waiting to hear more details.

“We don’t want to sanitize it. I want people from the left to attend. I want it to get heated but I want it to be respectful,” says Scott.

“I want them to see and know the Donald Trump I know and they will say, ‘This guy isn’t who I’ve been lead to believe he is.’”

We won’t hold our breath.