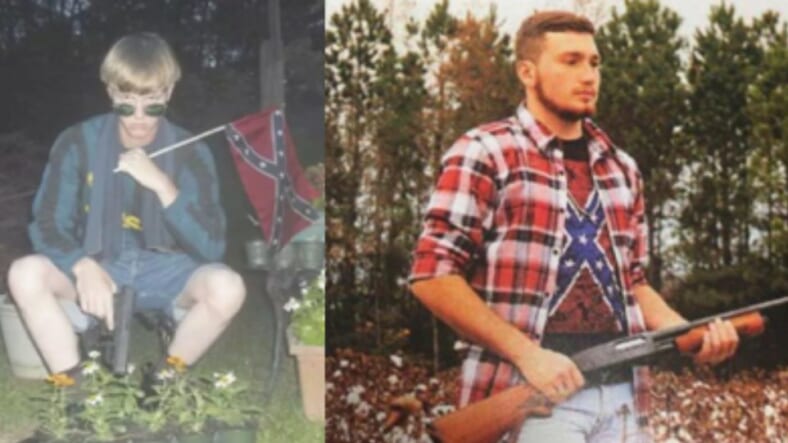 This week, a school district in North Carolina, had to issue an apology after one of its yearbooks featured an image of a white student wearing a Confederate flag T-shirt and holding a shotgun while standing in a cotton field.

The controversial photo appeared in the Cape Fear High School yearbook, in a section devoted to senior students, after being submitted by the student’s mother, who maintains “she saw nothing wrong with it.”

Other folks had different opinions.

“In light of all the publicity we’ve had lately over shootings in schools, I thought it was kind of tacky that we’re featuring photos publicizing guns,” a parent named Jay Butler told the Charlotte Observer.

“It disrespects other students and nationalities. Whoever did the yearbook really screwed up on this one,” Butler also pointed out. “People were beaten, whipped, raped just to pick that cotton. It is offensive because we’re trying to get past that.”

But other parents believe Butler and people who find the photo offensive are looking too deeply into it.

“Let’s say you had a kid who was black and his grandparents were great members of the Black Panther Party. I’m going to wear a Black Panther shirt to my senior picture. You can’t judge the young man for that,” said one man who preferred to remain anonymous.

Some acknowledge that the image has clear racist undertones while giving a nod to the Civil War, while others view it as a blue-collar cultural symbol for working class Southern whites.

What all parties involved need to recognize though is that we’ve seen this before.

This picture is so eerily reminiscent of the ones we saw of Dylann Roof following the Charleston shooting at Mother Emanuel church in 2015, you almost can’t help but wonder if it was more than intentional than this student and his mother are willing to admit to the media.

The bloody Charleston massacre, that left nine people dead, gave Roof the dubious distinction of becoming the first person sentenced to die for a federal hate crime in the entire history of this country.

So you would think that in a post-Dylann-Roof world parents and law enforcement alike would be hyper aware of the warning signs and rally as a collective after the school publishing the photo. But the fact that there is such rigorous debate about if this picture is even offensive is just another example of how white America turns a blind eye to the warning signs of homegrown domestic terrorism when it comes from their own.

Meanwhile,Roseanne did a whole episode this week about how the Conner family suspected their peaceful, law abiding neighbors of being terrorists simply because they were Muslim.

The FBI has already confirmed that the biggest terrorist threat in this country is domestic, particularly white men with leanings towards white supremacy. But the Jeff Sessions-led justice department has fixed their attention on fake Black-identity extremists as the greater threat to America as if that’s even a thing.

Why is it people of color who continuously get the suspicious side-eye, while this young man in Fort Bragg, North Carolina gets to have his Dylann Roof Halloween costume featured in the yearbook?

The answer to that question was pretty brilliantly explained by Roof’s elementary-school principal, Ted Wachter, who was interviewed by Rachel Kaadzi Ghansah, a writer for GQ, for her Pulitzer-Prize-winning profile on domestic terrorist Dylann Roof last year.

“To understand Dylann, you need to read The Hidden Injuries of Class,” Wachter said.

What that book revealed was “how white working-class people in Boston, in South Boston, the more you interviewed them, what came out, especially after a few beers, is how inferior they felt to all the Harvard, Cambridge, bright, educated people.”

In Wachter’s mind, Dylann wasn’t stupid, but he felt displaced. It was a case of class resentment. “And here’s the funny thing: If I had a dinner party right here with just white Ph.D.’s, it would not be socially acceptable for me to make any slur to an African-American person or a Hispanic person or a Muslim, but if I refer to poor whites as rednecks—”

“That would almost be socially acceptable to say those things. It just shows you how alienated they are. And these poor white working-class guys, they must realize this. See? So maybe Dylann’s family is a good example of downward social mobility. And Trump showed us this, that we underestimated how vulnerable and precarious self-esteem is for white, working-class people in this society. They not only see the white elites, but then they see…”

This is where the writer, who is a black woman, finishes his sentence and says, “They see us, black people, coming from behind, eclipsing them.”

And this point is confirmed by the parents who are so staunchly defending this teen’s tacky Confederate flag t-shirt wearing, gun toting, chilling in a cotton field ass picture.

@sistercircletv This is an image of a student placed in the 2018 yearbook of my former high school, Cape Fear Senior High in Fayetteville, NC. Would be interested in hearing your thoughts. https://t.co/b88HXK3NYy pic.twitter.com/hNXDnNCeg0

They really do believe that this boy is standing up for working class Southern whites.

These are the same people who voted in record numbers for Trump. They see hashtags like #BlackExcellence and find themselves thinking, “What are these people doing so far up in the food chain? What has happened to me? I’m white. That was supposed to be my spot!”

The reason why history is repeating itself so blatantly, and will continue to do so, is because the resentment of poor white people against all black people who have eclipsed them is not only allowed but encouraged by our society.

When folks sympathetically say shows like Roseanne are for the working class, I assure you they mean poor white people. It’s almost as if the black working class doesn’t exist to them and we are all split up into two categories of extremes: Uppity Liberal Negroes and Ghetto Trash.

And with all our mouthy academics screaming “Black Lives Matter!”, and our gang banging rappers who somehow still become millionaires, they’re sick of black excellence, and the Obama generation, and all that blatant blackety blackness taking up space they believe is rightfully theirs.

When Dylann Roof was asked why he did what he did, he stated plainly, “I had to.” Because Black Americans, were “raping our women and are taking over our country.”

Be very clear, it is those exact same sentiments, that got that yearbook picture approved and sent out to all the students at Cape Fear High.

In a bid to do some damage control, Wednesday, Cumberland County Schools issued a statement.

“We sincerely regret that a photo of this nature was overlooked,” the message from the district read. “It does not reflect the values of Cape Fear High School. Our climate is one of inclusiveness.”

They also went on to say measures will be taken “to ensure there is a more thorough review process of the yearbook in place before it is published,” and assured everyone that this would never happen again.

While the apology may have made some parents feel better, that last part is complete bull. Of course it’ll happen again.