Check out a few of our favorite looks from the red carpet. 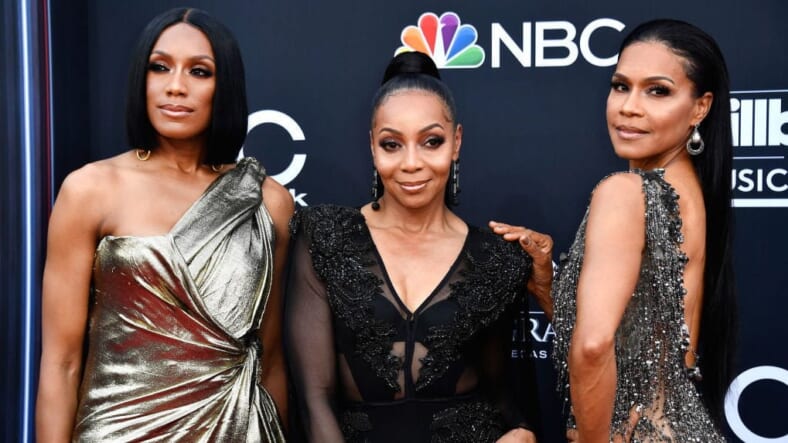 The stars were out in full effect for the 2018 Billboard Music Awards in Las Vegas on Sunday and we’ve got a rundown of a few of our favorite looks from celebrities like NE-YO, DJ Khaled, Tyra Banks, En Vogue and more.

It seems there were quite a few trends heating up the carpet with lots of ladies opting for all black ensembles while others chose to make bold statements in barely there, super sheer outfits. When it comes to the men, tons of guys seemed to be experimenting with bold colors and we’re not mad at the departure from drab suits.

Check out these red carpet moments from these stylish stars:

Janet Jackson was a vision in white when she hit the red carpet in a simple T-shirt and a full, sparkly skirt. Her brown, leather belt helped accentuate that teeny-tiny waste while her huge gold hoops prove she didn’t come to play. We can’t wait until Ms. Jackson hits the stage!

En Vogue hit the carpet looking radiant as ever in gorgeous gowns and confidence for days. The trio that consists of Terry Ellis, Rhona Bennett, and Cindy Herron will be performing alongside another beloved trio from our pasts, Salt N Pepa.

NE-YO hit the red carpet at the 2018 Billboard Music Awards in a red suit with black buttons. “If I can’t do anything else, I can put on a suit,” he said on the carpet. The World of Dance judge is gearing up for another season of the hit competition show and awaiting the birth of his next child any day now.

Tyra Banks opted for an all-black ensemble and made the mistake of wearing velvet in the Vegas heat. Still, her high ponytail and flawless makeup made her high-collared, ruffled sleeve ensemble from Mark Ballard seem appropriate for the event, if not a little too fancy.

Rapper Quavo was on deck to represent for his rap group, Migos, who are up for three awards this year including Top Duo/Group, Top Rap Album and Top Rap Artist. His brightly-colored top and huge gold jewelry made him a hard one to miss.

Normani bared a lot of leg in her sheer, lingerie-looking gown that featured a super high slit. Good thing those black briefs are staying in place, just like her lovely half up hairdo. The former Fifth Harmony member was full of confidence as she stepped out solo.

Jennifer Lopez didn’t disappoint in a velvet and snakeskin look. Her thigh-high boots were the perfect match, but we’re guessing the World of Dance star who will perform her latest single, “Dinero” featuring Cardi B and DJ Khaled during the show is sweating bullets underneath that cool demeanor.

Khalid is another man who isn’t afraid of color and the singer who’s up for five awards was looking pretty preppy in his orange pants, plaid blazer, and white hoodie. His white sneaks kept things casual, but we bet he’s full of nerves going in to the big event.

Justine Skye showed off a sheer gown that was embroidered beautifully and made sure to cover up her goodies with black briefs and a matching bra. We’re loving her super sleek hairstyle.

DJ Khaled was all smiles in an all-blue suit and matching sneakers on the red carpet where he chatted up the press line. He’s nominated in two categories: Top Rap Song for “I’m The One” and Top R&B Song for “Wild Thoughts.”

Ciara jumped on the sheer gown trend and pulled it pff perfectly in a barely-there gown that showed off every curve of this proud mama of two. Her strappy sandals and wavy tresses were great compliments to this risqué style move that didn’t leave much to the imagination.

John Legend hit the carpet looking awfully rested for a man with a brand new baby at home. The singer’s wife showed off the latest addition to their family, Miles Theodore, on social media just hours before the awards show. Looks like he took a page from Sabrina Dowrhe and decided to put his love for Gucci on full display.

Salt N Pepa hit the carpet sans Salt, with only Spinderella and Pep posing for photos ahead of their big performance with En Vogue. While Pepa chose to pair the night’s biggest trends with a sheer, black one piece that even covered her fingers, Spin chose a black, leather trench coat for the blazing heat.