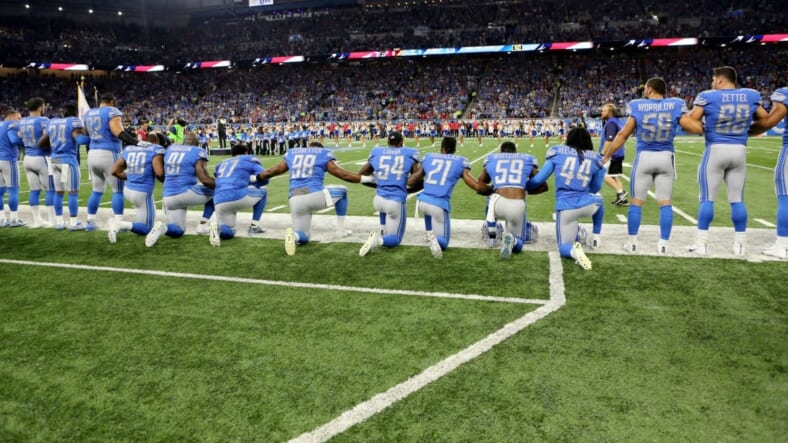 The NFL had one job: to stand strong in the face of the President and support the players who are essentially the heart, spine and legs of the league by way of their talents on the field.

But instead, the NFL cowered and acquiesced to the whims of a Twitter-finger tyrant and handed down a heavy-handed penalty for players who kneel on the field during the national anthem.

Although Donald Trump expressed his support of the NFL’s ban on kneeling during the national anthem, many coaches and players beg to differ with the new mandate which will levy a fine against them by the league.

OPINION: The NFL’s latest policy on player protests fumbled its chance to stand on the right side of history

But players are not the only ones whose free rights will be stripped away.

San Francisco 49ers president and CEO Jed York, whose franchise has been at the center of the controversy since ex-quarterback Colin Kaepernick started the protests, said Wednesday that he plans to close the concession stands as the national anthem plays.

“I don’t think we should profit during the national anthem,” York explained, according to ABC 7 in San Francisco. “If we’re going to ask people to be respectful, I think that’s something we should do to be successful.”

Reports said York didn’t vote on the new NFL policy which suggests that he has some reservations about forcing players to play nice. Especially given that Kaepernick’s kneeling protest against racial injustice ignited the national conversation.

“I think there are a lot of reasons, and I’m not going to get into all of them,” York answered when asked why he didn’t vote. “But I think the gist of it is really that we want to make sure that everything we’re doing is to promote progress. And I think we’ve done a good piece of that so far.”

“We want to make sure we have an all-encompassing sort of solution to how we look at this and not point the finger at one group or another,” he added.

READ MORE: Donald Trump on NFL players who kneel during national anthem: ‘Maybe you shouldn’t be in this country’

Johnson said he will absorb any fine fees incurred by players who kneel during the anthem.

“I plan to sit in the very near term with Coach (Todd) Bowles and our players to discuss today’s decision regarding the National Anthem,” Johnson tweeted in a statement.

The NFL Players Association responded saying that it was shut out of talks and they plan to review and challenge any part of the policy that goes against the collective bargaining agreement.

Even though the NBA has a similar policy where players are prohibited from kneeling in protest, former NBA player Jalen Rose said the NFL is on the wrong side of this issue.

“The NFL continues to handle major situations so wrong that it’s pathetic,” Rose said on ESPN.

“So, let me get this right, you going to basically say to a player to put his moral obligations in front of his team responsibilities?” he asked. “This is ludicrous by the NFL.”

Carolina Panthers wide receiver Torrey Smith took issue with the NFL’s assumption that kneeling during the national anthem was a sign of disrespect, he tweeted:

“Appropriate respect for flag and anthem” implies that guys were being disrespectful towards it. Which is an opinion. Most people who believe that ignore the responses from the players and more importantly why men chose to protest. https://t.co/j7nyw2Lkai

Philadelphia Eagles safety Malcolm Jenkins said the NFL’s no kneeling rule won’t stop him from fighting causes he holds close to his heart.