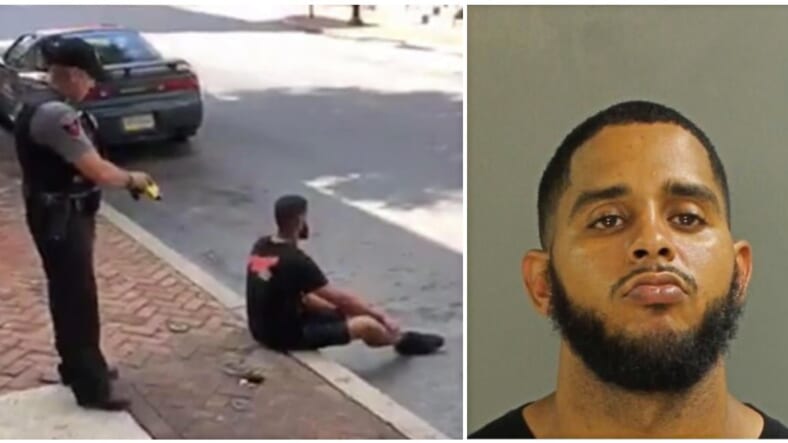 Unarmed black man, Sean Williams, was tasered by police in the back while complying and peacefully sitting on a street curb. (Screen grab/Lancaster Police mugshot)|

A crowd of over 200 people rallied on the steps of the Lancaster County Courthouse last Friday to protest a city police officer’s use of a Taser on a 27-year-old man the day before, reports Lancaster Online.

A video shot by a witness shows Officer Philip Bernot using the Taser on the back of Sean D. Williams as Williams sits on a city curb. Since the clip was released, it has gone viral and amassed over 2 million views on Facebook.

Police had reportedly been called to the scene for a disturbance allegedly involving Williams. He was subsequently arrested on an outstanding warrant, arraigned, then released on unsecured bail.

When someone is “sitting peaceably … you do not abuse your power,” community advocate Kevin Ressler told the protestors.

Organizers of the rally condemned Bernot’s actions as “a shocking unprovoked incident of police brutality.”

Williams attended the rally on Friday accompanied by his family members. While he appreciated the support, he admitted, “I really don’t want to be here right now.”

What made the video of Williams being tased particularly infuriating was the the officers were giving him contradictory instructions, which immediately set him up for failure from the onset.

In the footage, the male officer, Bernot, had the Taser focused on Williams’s back, while repeatedly telling him “legs out!” and “straight out!”

But at the same time, the female officer on the scene, Shannon Mazzante, can be heard off-camera, yelling just as insistently, “Put your legs straight out and cross them now!”

“Legs straight out, or you’re getting Tased,” Bernot warned right before squeezing the trigger, sending a violent current of electricity through Williams’s body.

“If that was a gun, my son would have been dead,” said Williams’ mother, Dana York.

Ressler and a half-dozen other speakers called for Bernot’s suspension, a community meeting with the police and the creation of a civilian review board to review such incidents in the future.

In a statement released Thursday, Mayor Danene Sorace called the video upsetting and the incident of “great concern.” Chief of Staff Matt Johnson confirmed a news conference is planned for Monday to address the next steps to be taken.