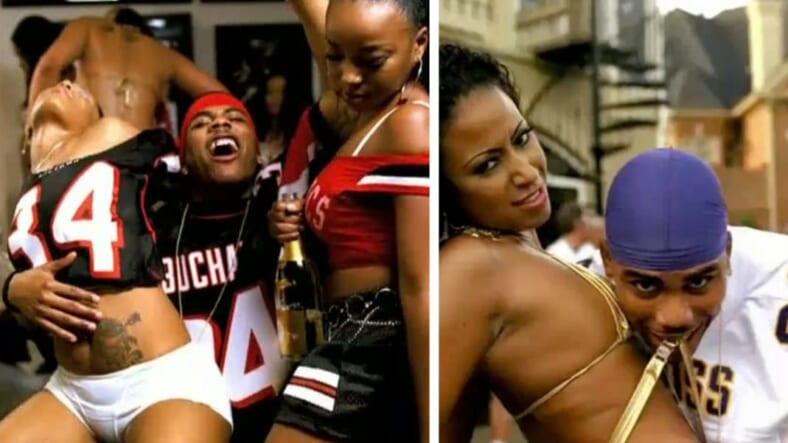 In a recent interview, Kareem Johnson, the producer of Nelly‘s “Tip Drill” rap video, defended the infamous scene where Nelly swipes a credit card between the butt cheeks of a Black woman.

The 2003 video was a hit on BET’s Uncut, a late-night program that featured videos too racy for daytime hours. Like many hip hop videos at the time, the visuals for the track included a lot of ample-bottomed, coke-bottle-shaped women gyrating in barely-there attire.

Though the video was a hit on BET, not everyone was pleased with it—not the least of which the young women of Spelman College. A very vocal group of students at the women’s college wanted to speak to Nelly about their concerns at the rapper’s then-upcoming bone marrow drive that he was hosting in hopes of saving the life of his sister Jacqueline who was battling leukemia. The student activists (like a lot of women around the country) were appalled at what they saw as the misogynoir and degrading depictions of women in the “Tip Drill” video.

Nelly’s proposed bone marrow drive never happened, but the ladies of Spelman did rally together and hold a separate (and apparently well-attended) bone marrow drive. Unfortunately, Nelly’s sister eventually passed away from leukemia. Over the years, there has been back and forth about who was responsible for cancelling the initial drive.

The Defense of the Video

Now, 15 years after the infamous credit card scene in “Tip Drill” took over the national pop culture conversation, the producer of the video, Kareem Johnson still has a few words to say about it.

In an interview with Curly Nikki, Johnson defended the general concept of the video. “This whole setup was not a foreign concept: a house party in ATL with rappers, ballers and girls in bikinis. It was a popular theme at the time on camera and in real life,” said Johnson.

Further into the interview, the entertainment industry vet doubled down and specifically defended the credit card swipe scene.

“The scene in question was not planned, but it wasn’t rejected either, said Johnson who has worked with a slew of big names in the music business like Nas, Mary J. Blige, Erykah Badu, and Snoop Dogg.  “If the girls weren’t in the video, this wouldn’t be a conversation. They were willing participants. That’s the part that was missed. The model never requested the scene to be edited. If Nelly has to be held accountable, so does the model. Responsibility needs to be shared.”

Johnson was asked how he explains the “Tip Drill” video and its backlash to his daughter. ” I have a daughter and she is 18. She’s never seen the video. If she does, we will discuss it and have conversations about choices, because we all have them.”