First Lady Melania backtracks on her praise of LeBron James because…. Trump 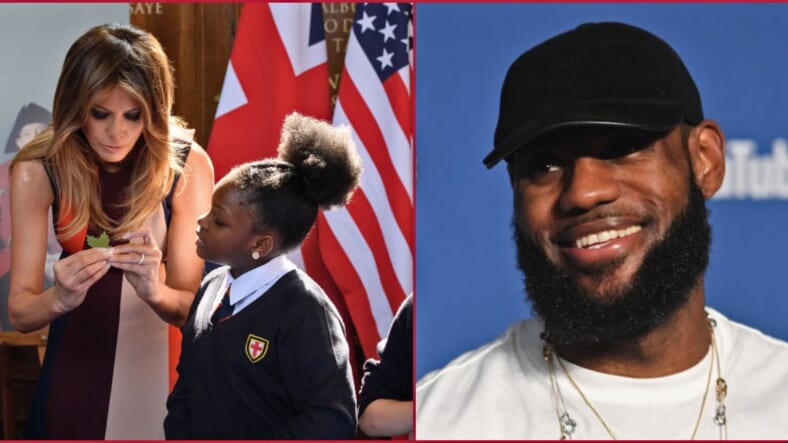 First Lady, Melania Trump (Photo by Leon Neal/Getty Images) is backtracking from earlier statements that she supports LeBron James and his new school, I Promise. Now, she’s focusing on the kids. (Getty)

Melania Trump has no problem cozying up to men her husband can’t stand.

First it was Barack Obama, and now LeBron James seems to be the newest high profile Black man whose caught her eye despite her husband’s protests.

While all the news has been focused on what the First Lady tweeted initially, now, it seems, she is back peddling from her initial statement. Perhaps, the President (or a savvy White House advisor) suggested Melania Trump think twice about her allegiance.

This weekend, the First Lady praised James less than a day after her husband blasted the NBA star on Twitter, insinuating that James and CNN’s Don Lemon are less than smart individuals.

“Lebron James was just interviewed by the dumbest man on television, Don Lemon,” Trump tweeted Friday. “He made Lebron look smart, which isn’t easy to do. I like Mike!”

Lebron James was just interviewed by the dumbest man on television, Don Lemon. He made Lebron look smart, which isn’t easy to do. I like Mike!

Saturday, in a surprising move, the First Lady’s spokesperson Stephanie Grisham released a statement praising James, saying he “is working to do good things on behalf of our next generation,” and said she “encourages everyone to have an open dialogue about issues facing children today.”

The poorly timed statements even said she was open to visiting the I Promise School, the educational institution opened by James last week that is dedicated to serve underprivileged children  in his hometown of Akron, Ohio – leading many to both cackle and speculate that she was throwing shade at her husband by siding with the basketball player.

Warning. I'm petty as hell. I'd like to point out a few things to @realDonaldTrump:
1. Happy #ObamaDay.
2. You're a jackass.
3. Your tweet against Lebron James backfired and Michael Jordan and Melania Trump took Lebron's side.
4. You're a dumbass.
5. Obama did it better. ?? pic.twitter.com/QvU3nZqTkN

Then, after getting dragged by Twitter for 24 hours, on Sunday, the First Lady quickly backtracked on her stance.

An unnamed senior White House official has now clarified to ABC News that she wasn’t siding with James, but more so siding with the children — an odd response given children were never even brought up in this feud.

“That wasn’t her taking sides – that was her office sticking to what she is focused on, which is using Be Best for what it intended – to help children,” the official explained.

Perhaps the truest irony of all this is, before Trump became president he was actually a huge James fan himself.

Congratulations to @KingJames on winning Athlete of the Year in last night’s @ESPYS. LeBron is also a great guy!