More Than Monuments: How African American landmarks can serve as healing spaces in the wake of Charlottesville 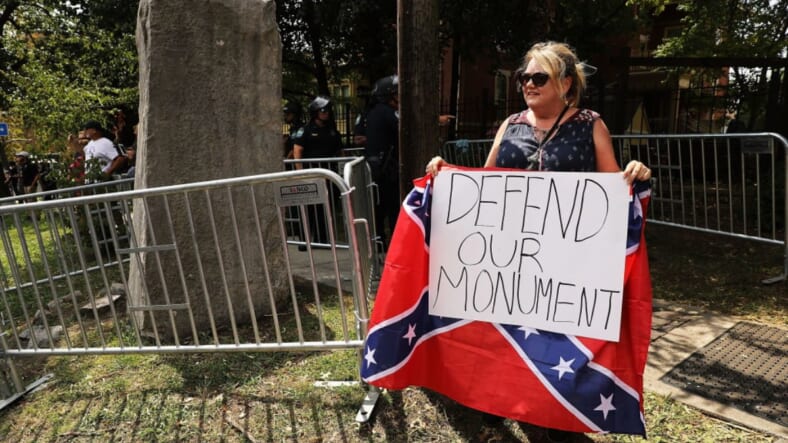 Pro-confederate supporters face off against hundreds of demonstrators against a Confederate memorial monument in Fort Sanders as stand against the removal of the on August 26, 2017 in Knoxville, Tennessee. The rally around the disputed memorial to the Civil War dead comes two weeks after a gathering of white supremacists and counter demonstrators in Charlottesville, Virginia that turned deadly. (Photo by Spencer Platt/Getty Images)

The city of Charlottesville, Va., is under a state of emergency this weekend as law enforcement prepares for the one-year anniversary of the “Unite the Right” rally on Sunday, Aug. 12. Last year, deadly violence erupted in the city where white nationalists had gathered to protest the removal of a monument dedicated to Robert E. Lee. Heather Heyer, 32 was killed and many others injured after alleged white nationalist sympathizer, James Alex Fields Jr., 20, drove his car into a crowd of counter-protesters. After the rally, 20-year-old DeAndre Harris was surrounded and viciously beaten in a garage by a group of white supremacists. Earlier this year, three men were found guilty of maliciously attacking Harris.

According to the Southern Poverty Law Center, at least 30 monuments have been removed since last year’s violence in Charlottesville. However, the statue of confederate General Lee still stands in the Southern city, a painful reminder of America’s brutal history of slavery and today’s racial violence and injustice. Nevertheless, Charlottesville was a turning point for America to look inward.

“In the year since the tragic events in Charlottesville, we have seen a movement towards hope, peace and justice emerge in response — yet there is still work to be done,” said Stephanie Meeks, president and CEO of the National Trust for Historic Preservation. “Our nation has begun to recognize the many ways that understanding the shared American story shapes our present and future, and how we must continue to accelerate the important work addressing gaps in the American story.”

After the violence in Charlottesville, the National Trust for Historic Preservation launched the African American Cultural Heritage Action Fund to change the narrative and amplify stories of African American activism and achievement that have too long been overlooked.

“We must continue to reconstruct our national identity and move forward to a vision of America where all of us feel represented in the collective historical narrative,” said Meeks.

“Our vision is to tell the full history of our nation, and to honor the full story of African American struggle and achievements,” said Brent Leggs, director of the African American Cultural Heritage Action Fund. “We believe the time is now to uplift diverse communities and to create an inclusive American narrative and landscape where every American can see themselves in the places that surround us. We believe that Black history and Black historic spaces matter, and the culture and history that happened there must be preserved for current and future generations.”

For example, the Action Fund, said Leggs, designated the birthplace of singer Nina Simone in Tryon, N.C., on Juneteenth this year to celebrate the voice of the American Civil Rights Movement and to honor the hidden voices of Black female performers throughout American history. The American Cultural Heritage Action Fund also awarded a grant to an organization in Richmond, Va., to conduct an economic impact analysis of Shockoe Bottom, the second largest slave holding site in America.

Leggs noted that many African American historic places are undervalued and underfunded. The Action Fund, he said, will help address years of deferred maintenance and invisibility of these spaces.

Places like the Mary and Eliza Freeman Houses in Bridgeport, Conn. The two sisters were successful Black entrepreneurs and their home was part of a free Black settlement called Little Liberia. The Action Fund has also supported the Weeksville Heritage Center in Brooklyn, NY, which features three historic homes called the Hunterfly Road Houses that were part of another free Black community in the area. Other places the Action Fund has supported include Chicago’s South Side Community Art Center, where Black artists are able to have their own space to express their individual creativity, and historic civil rights landmarks in Birmingham, Ala.

“The preservation of Black history in its physical and cultural form is preserving American history,” said Leggs. “Our nation can come together to fill gaps in our cultural landscape [and] shine a national spotlight on hidden figures in American history. We can ensure that our current and future generations are empowered and educated about the full history of America.”

READ MORE: Out of jail, Meek Mill tries to get his former cellmate released

As the country turns its attention to Charlottesville and DC on this one-year anniversary of this rally, it’s important to remember that what started the conflict was a disagreement about the preservation of historic monuments. As we try to move forward together as a nation, it’s imperative to include Black landmarks in the conversation about preservation especially, since these pieces of our history can be used as tools to create healing, education and hopefully a little reconciliation.

Lottie Joiner is an award-winning journalist and editor-in-chief of The Crisis magazine, the official publication of the NAACP.