FYI...spoiler alerts and truth ahead. 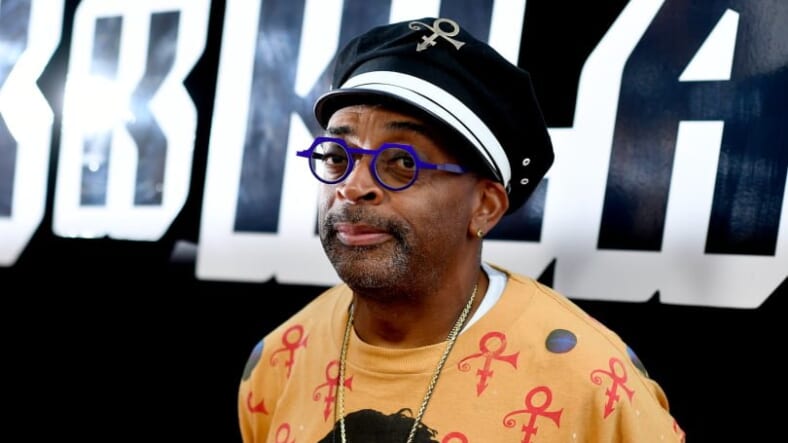 <> at Samuel Goldwyn Theater on August 8, 2018 in Beverly Hills, California.

A weekend last summer when hatred spilled out onto the streets, blood stained the pavement and the country’s newly elected President, who promised to represent all people, failed to unite the nation.

While Director Spike Lee has been exposing America’s dirtiest race relations laundry since “Do The Right Thing,” there’s something about “BlacKkKlansman” that feels more urgent and timely than ever.

Lee’s version of the little known true story of a Black police officer, Ron Stallworth (played by John David Washington), who bravely infiltrates the KKK in the 1970s, is an entertaining adventure, but has deeper messages about racism, policing, and America’s legacy of violence — meaning we haven’t come as far as we’d like to think we have.

Spike Lee has been clear about letting audiences think for themselves to find the lessons, but if you watched the movie chances are the following messages hit home:

One of the most riveting moments of Blackkklansman takes place during the Stokely Carmichael speech at the Colorado Springs Black Student Union.  Carmichael, donning a Black leather jacket, captivates the crowd of young Black students– first by telling them how beautiful Black people are, then by telling them to embrace their power.

“Stop running away from being Black,” he says (a message worth hearing today in a culture obsessed with skin-lightening and surgically altering naturally Black features).

But Ron Stallworth (John David Washington), who’s in the crowd, isn’t there to enjoy the moment with his brothers and sisters. Instead, he’s undercover collecting intel for the police department, whose greatest fear is that the Black Panther leader will stir up the good Black folks of Colorado Springs into violence.

This scene in BlacKkKlansman is reminiscent of the days of COINTELPRO, the FBI’s notorious undercover operation that infiltrated civil rights and Black Power groups and created dissension to break them apart.

Despite any good teaching, community service and self-love being taught by the groups’ leaders, the idea of Black people being armed and angry is too much of a threat to risk letting them exist.

The irony is that authorities used Black folks to do the dirty work.

2. Racists are still using the same language today as they did back then.

At one point in BlacKkKlansman, the camera pans to show the freshly mowed lawn of a KKK member with a sign that reads: “America: Love it or leave it.”

If you’ve listened to any extreme “alt-right” pundits lately, chances are you’ve heard similar rhetoric. Former KKK Grand Wizard, David Duke, is seen in one powerful clip during the Charlottesville rally saying that “Unite the Right” was the first step in “taking America back.”

An uptick in hate crimes over the past couple years has been made real through headline after headline of sad stories: a grandpa is bloodied and beaten in a park, workers cursed out for speaking Spanish, a woman harassed for wearing a Puerto Rico shirt and an ROTC member is stabbed to death while visiting a college campus.

Whether it’s “go back to Africa” or “get out of my country,” these dog whistles are the same old tricks for people who use patriotism as an excuse for racism.

3. Not all KKK members wear hoods.

At one point in the movie, David Duke (Topher Grace), explains eloquently that KKK members wear suits. In fact, there are few KKK members in high-level positions around town, and a couple with military credentials.

History backs this version of the story up.

In reality, Duke campaigned for Governor of Louisiana, U.S. Senate and even President in 1988. He has a bachelors degree and a PhD (he’s so smart, he’s onto Blackkklansman for being propaganda!)

With new white supremacist leaders like Richard Spencer dressing in suits and an army of supporters in tiki torches, khakis and polo shirts, the tradition of normalizing hatred continues.

4. White women were complicit or active participants in upholding racism.

While the stereotypical image of a KKK member is often a white man in a pickup truck with a confederate flag, BlacKkKlansman smartly highlights the role that white women played in supporting Klan activities.

The character, Connie Kendrickson (Ashlie Atkinson), wife to Felix Kendrickson (Jasper Pääkkönen), is more than ready to play her role in the cause, and in one scene, laughs orgasmically in bed at the thought of “killing n**gers.”

Despite her misogynistic husband’s disrespect, as long as she was above a Black person in the hierarchy, Connie (thought) she was good.

The real KKK did have a women’s auxiliary chapter in the 1920s. According to author Kathleen Blee, it was “not only a way to promote racist, intolerant and xenophobic policies, but also a social setting in which to enjoy their own racial and religious privileges.”

Similarly, when 53 percent of white women voted for Donald Trump in the 2016 presidential election, the debate raged on and on about what it meant.

BlacKkKlansman shows that everyone had a role to play in perpetuating a racist society– and some women were more than happy to play it.

5. Media has a huge role in driving racist propaganda.

Throughout BlacKkKlansman we hear and see the power of the media to hype up people’s most racist fears.  From the KKK advertisement in the newspaper (the newspaper!) to the radio playing in the car with a racist commentator, Spike Lee gives us a taste of how immersed people are in bigotry.

The movie opens with Alec Baldwin going on a hateful, stutter-filled, tirade against n-words, Jews and anyone who challenges the pure Aryan race, as DW Griffith‘s “Birth of a Nation” plays in the background.

Lee brings it full circles by giving us a history lesson via the legendary Harry Belafonte, who plays an activist speaking to a group of Black students about the history of the movie “Birth of a Nation.” how it reinforced fear and hatred of Black people, and was even played in the White House by a U.S. President (Woodrow Wilson.)

6. Black people must tell their own stories– or they will be buried.

Hands-down one of the most powerful moments in BlacKkKlansman is when elder Harry Belafonte tells the true story of the brutal lynching of 17-year-old Jesse Washington, for the alleged rape of a white woman, Lucy Fryer.

As pioneering Black feminist journalist, Ida B. Wells, uncovered, most of these rape accusations in the 1900s were nothing but excuses to kill Black men.

Belafonte tells the gruesome details of Washington’s mutilation, castration and burning, as the young Black students cringe and cover their faces in horror, holding up poster boards of his charred Black body.

Watching this took me back to my first visit to the National Museum of African-American History in Washington, D.C.

We all grew up hearing about lynching… but walking through the museum’s slavery exhibit into the Jim Crow era, brought tears to my eyes.

Black people must pass down stories like Jessie Washington’s and countless others, so our children know and are motivated to work for racial justice.

Spike Lee did us a service by not only creating a film that told the story about a different kind of American hero, Ron Stallworth, but also about the victims of America’s sins of racial hatred.

The movie’s use of real footage from Charlottesville, and the voice of a Black Lives Matter activist makes the story of that day unforgettable:

“We didn’t want them here!” the activist screams.

And yet they came.

If America doesn’t face these truths, Charlottesville won’t be the last sad chapter in our fight for racial equality.

Natasha S. Alford is the deputy editor at theGrio.com