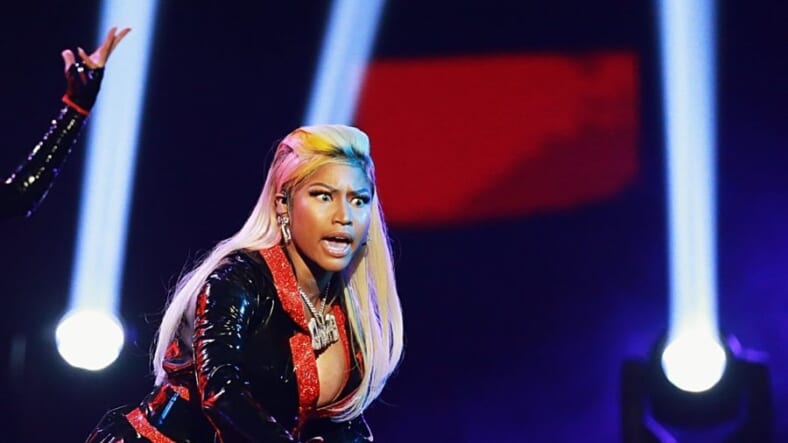 In a new tweet, the “Hot Girl Summer” rapper apologized to her distraught Barbz fans and revealed that she would be giving them more details on her previous retirement tweet in a Queen Radio discussion. (Photo by Leon Bennett/Getty Images)

Top music-industry insiders are whispering that rapper Nicki Minaj is “spiraling out of control,” due to disastrous ticket sales for her upcoming tour.

Due to the lack of public support, the tour may be in danger of being canceled – entirely.

READ MORE: Omarosa releases new video and proclaims ‘This is the beginning of the end for Donald Trump’

“Nicki has gone off the rails,” an industry insider told the New York Post. “She can’t take it that she sold less records than Cardi B (who’s stealing her thunder big time) in her first week; she can’t take it that Travis beat her to No. 1. Her ticket sales for her tour are in the toilet, and it’s making her even more crazy.”

Amidst what has arguably been the sloppiest album roll out of her career, Monday, the Chun-Li rapper went on a Twitter tirade against fellow rapper, Travis Scott and his child’s mother, Kylie Jenner, accusing the couple of leveraging interest in their baby, Stormi to boost his album stats.

“He knows he doesn’t have the #1 album this week,” she tweeted. “I love my fans for the #1 album in AMERICA… I put my blood sweat & tears in writing a dope album only for Travis Scott to have Kylie Jenner post a tour pass telling ppl to come see her & Stormi. lol.”

Nicki Minaj isn’t having a meltdown. She’s smoothly transitioning herself into the new age Joan Rivers and we are all eating it up. Joanne Budden.

Minaj then chose her new Beats 1 show, “Queen Radio,” as a platform to further lash out at Scott for manipulating the sales of his No. 1 album by using a well-known industry practice of bundling free albums with cheap merchandise — like clothing and so-called tour passes — to bump up sales numbers.

Minaj fumed that Scott was “selling f - - king sweaters [and] tour passes” and parading his daughter Stormi “for publicity.”

What she fails to acknowledge in her rant is that even though she used the exact same bundling tactics herself, Scott still outdid her.

That same evening, after her performance at the MTV Video Music Awards, Live Nation released an official statement announcing: “Following her unforgettable VMA performance, Nicki Minaj has decided to reevaluate elements of production on the NickiHndrxx Tour.”

Not surprisingly, Twitter is having a field day with this one.

Baby Stormi was 6mos when she stopped Nicki Minaj from going #1 https://t.co/iCOFjnOSy3

Stormi when she seen Nicki Minaj use her name an excuse for not getting #1 pic.twitter.com/CvKZFXdwFl

Stormi when she runs into Nicki Minaj at Coachella next year pic.twitter.com/koCfuVk0yw