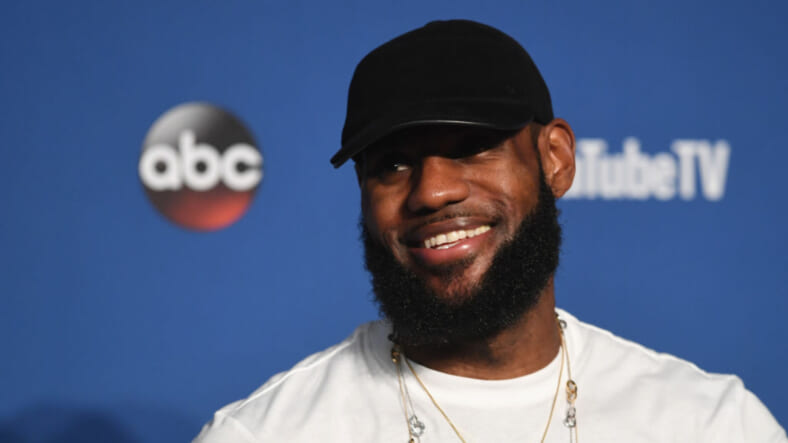 LeBron James, the LeBron James Family Foundation and the Akron (Ohio) Public Schools are teaming up to launch a new elementary school for at-risk children in his hometown of Akron, Ohio. (Photo by Jason Miller/Getty Images)

LeBron James admits that he had to warm up to white people once he entered a predominately white private Catholic School and was suddenly surrounded by them.

During an interview on the premiere of his new HBO show The Shop, James admits he caught a case of culture shock at the age of 14, when he attended the St Vincent-St Mary High School in Akron, Ohio.

“I was so institutionalized from growing up in the hood, it’s like “They don’t f**k with us, they don’t want us to succeed. The hierarchy was here.

“And then we’re here, matter of fact we’re underneath this chair,” he said using hand gestures to drive home his point.

As a youth, James was a skilled ball player who was selected to attend the elite school.

“I’m like, ‘I’m going to this school to play ball, that’s it’”, James recalled. “I want nothing to do with white people, it’s me and my boys.”

“We’re going to high school together and we’re here to hoop. That was my initial thoughts and my initial shock to white America when I was 14 years old for the first time in my life.”

Comedian Jon Stewart chimed in: “And that’s Catholic school, which is even whiter America,” he said to laughter. “There are levels to white America.”

—Serena, Venus set up Williams vs. Williams match at US Open—

Although it took some time, by year’s end, James said he became more comfortable.

Going to a white school also taught him about what a pantry was.

“Bread, cereal, chips, doughnuts, all that s**t is on the top of the refrigerator,” he said. “When I got to high school was the first time when I knew about a pantry.”