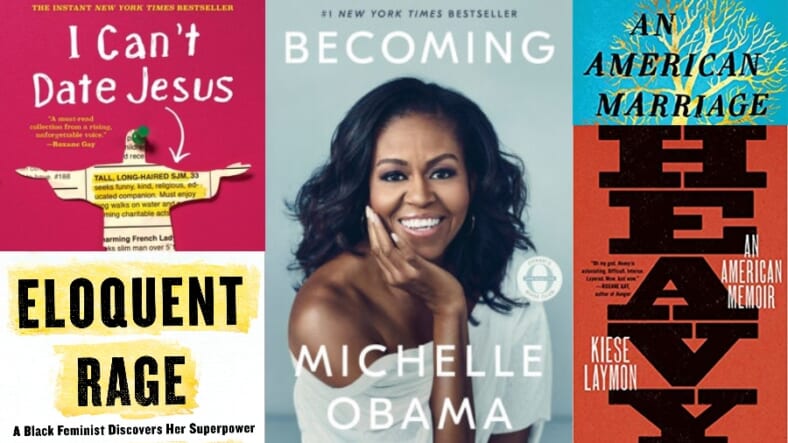 This year, we needed books more than ever to escape the maddening news cycle, enlighten ourselves, chuckle, and dream big dreams. As always, Black authors gave us some of that escape through their absolute best writing, creativity and inspiration to help us get through these days.

Now, as we close 2018, we look back at 10 Black authors who wrote books that will stand the test of time and made our worlds even more bearable.

No Ashes in the Fire: Coming of Age Black and Free In America

In his debut memoir, award-winning author and activist, Darnell Moore, gives an intimate and searing portrait of life growing up in Camden, NJ.  Moore is a young, Black queer man, coming to terms with his identity and place in America.  He survives abuse, battles depression and yet makes space for joy, healing and achieving his dreams.

“As I wrote the book, I imagined a 16-year-old Black queer boy or girl, or gender-nonconforming person, from the “hood” as my audience, Moore told theGrio.  “I was writing to youth, or young adults, who, like me, may have needed a book that affirmed their existences.”

“[It’s a} reminder that not all of us are so magical that we are strong enough to always survive the onslaught of structural, ideological, spiritual and physical violence. It’s a testament about collective strength and power.”

I Can’t Date Jesus will leave you cracking up with laughter and nodding your head like you’re in the front row at church.  But the pastor is author and journalist, Michael Arceneaux and he’s offering you a no bullsh*t sermon about life.

The New York Times best-selling book includes a collection of essays that explore Arceneaux’s life as a Southern Black man, trying to achieve his dreams and growing up gay in a religious household, taking us from his childhood in Houston to his media career in New York City.

Arceneaux’s voice is insightful, witty and bold, giving us a much-needed personal narrative that challenges society to do better, as he reflects on the lessons he has learned.

First Lady Michelle Obama‘s Becoming is a record-breaking book, which by now is already sitting under thousands of Christmas trees around the country for all the Black people we love.

The life story of the nation’s first African-American First Lady, takes you from the South Side of Chicago to inside the Ivy League of Princeton to the law firm where she would meet the man she helped become President.

What’s so refreshing about “Becoming” is Obama’s honesty—the kind you can only really have once you’ve left the White House. She names names; people who helped, hurt and taught her along the way. Her vulnerability in discussing the pulls and tugs of motherhood and a career that will spark much-needed dialogue.

Obama also offers a portrait of America from a perspective we can never replicate. The good, bad and ugly of politics, as well as her extraordinary realization of the American Dream.

This highly anticipated debut novel from Tomi Adeyemi lived up to every expectation, giving us an action-packed story rooted in West African culture.

The characters, dialogue and setting, make the thick book a breathtaking page turner steeped with lessons about family and love, as the protagonist Zélie fights to bring back magic to her people and defeat evil leaders.

Considering that it’s only the first installment of three books and a #1 New York Times Bestseller, with a movie in development, you’ll definitely want to add “Children of Blood & Bone” to your list to be ready for what’s next.

“An American Marriage” topped many people’s favorite book list as a fictional story about love, prison, heartbreak and reconciliation.

Two Atlanta newlyweds, Celestial and Roy are getting ready to start life anew until they get a devastating blow when Roy is sent to prison. Celestial finds comfort in a close friend and nothing is ever the same after.

Tayari Jones, an accomplished professor of creative writing at Emory University, did deep research into the American prison system to find inspiration for her New York Times bestselling book, but says it was a real-life encounter with an arguing couple at a shopping mall that gave her the epiphany to write the book.

“At the end of the day, these were two people in a relationship, a marriage,” Jones said in an interview. “And love requires more than a deep understanding of history, of justice. A relationship is about two people and whether they can share their lives, share a bed, share a home.”

In her debut book, Mashonda Tifrere, offers a reflective and honest guide to co-parenting and envisioning a different model for a happy family when your original plans have to shift.

Tifrere speaks from experience, after her highly publicized break-up with ex-husband, producer Swizz Beats, which was then followed by his very public marriage to Grammy award winning artist, Alicia Keys.  The three embarked on a journey to move from simply co-existing to truly becoming a family unit.

Despite any pain she experienced, Tifrere offers an inspiring personal narrative and represents a true example of a strong woman. Her journey is one that extends beyond romantic relationships; it’s instructive for general forgiveness, moving on and finding purpose.

It seems like every five minutes, there’s a book from a man telling women how to find love and selling a dream. “Boss Bride” is the total opposite in the sense that it’s a no nonsense guide for women on how to thrive in their professional life and have uplifting love in a modern world, all while maintaining their own inner happiness.

Jackson infuses her own inspiring life story of working as a Senior Editor at ESSENCE Magazine, beating cancer and finding the right love for her.  Filled with quotes and helpful tips, “Boss Bridge” gives women a playbook to help them become their own biggest cheerleader.

“Heavy” is an American memoir by professor Kiese Laymon that’s been called a masterpiece of truth-telling. Laymon writes the book in a series of non-traditional essays and prose to his mother. He starts his journey with growing up as a young Black man battling weight issues in Jackson, Mississippi and his complicated (and at times violent) relationship with his mom.

Laymon, who eventually becomes a college professor at University of Mississippi and has earned numerous awards for his writing, openly addresses anorexia, a topic we don’t often see Black men discuss openly, as well as other challenges and “heavy” issues on his soul and that of America.

“Heaviness evokes fear and desperation and, most importantly, a soulfulness,” Laymon said in an interview. “It’s something most people try to avoid, but it’s also something that I need to make it through the day.”

“Eloquent Rage” is a call to action and seriously the one book feminism needed this year. In an age of Women’s Marches and pink hats, Rutgers professor Brittney Cooper expertly weaves a story about the frustrations of being a Black woman who is fully realized and still confronted with insults to her intelligence daily.

“This is not a sassy Black girl’s tale,” Cooper writes. “We have been dreaming of freedom and carving out spaces for liberation since we arrived on these shores…. Black women know what it means to love ourselves in a world that hates us.”

Cooper not only gives us critical analysis in the book, but she also lays her own heart and story on the line, showing strength in vulnerability.

“Long Way Down” is an award-winning free-verse Young Adult novel that dives into the impact of gun violence on our youth and the spiraling effects of community pain.

Author Jason Reynolds tells the story of Will, a 15-year-old boy whose brother is shot and killed, inspiring him to follow the code of the streets and get revenge.

But the road to street justice isn’t at all smoothly paved and Will learns that the spirits of his ancestors call for him to rise above primal instincts.

This book is a must-read for anyone, but particularly young people who want to access a story in a different way—one that is infused with melody, rhythm and heart beyond the constraints of punctuation.