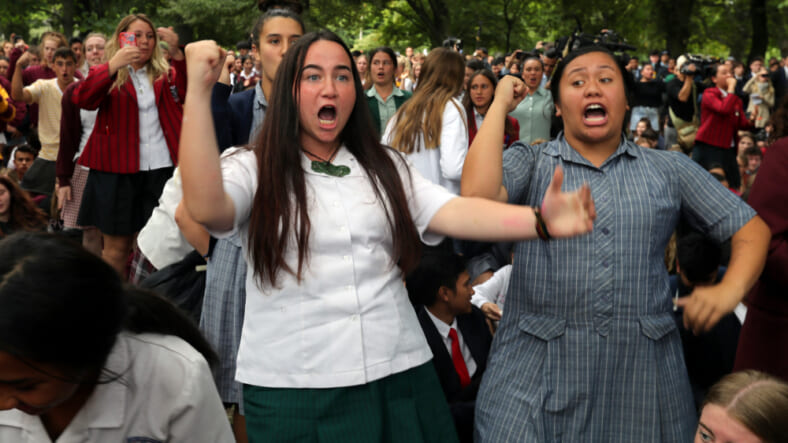 Students perform the Haka during a vigil to commemorate victims of Friday’s shooting, outside Masjid Al Noor mosque in Christchurch, New Zealand, Monday, March 18, 2019. A live-streamed attack by an immigrant-hating white nationalist killed dozens of people Friday as they gathered for weekly prayers in Christchurch. (AP Photo/Vincent Thian)

On Sunday, members of the Māori community performed a traditional dance called the ‘Haka’ in honor of the 50 people killed in two horrific mosque attacks in New Zealand.

After a white supremacist killed the worshippers in the worst mass shooting in the country’s history last week, they came together to give honor to the deceased.

The Māori are the second largest ethnic group in the country and the dance is often completed ceremoniously at funerals and special occasions, Yahoo reports.

Members of Māori community perform #Haka in tribute to those murdered in #Christchurch. pic.twitter.com/YjhqdWtSHx

And on monday, school students from around New Zealand joined the tradition performing their version of ceremonial tribute.

Brenton Tarrant, 28, was one of three men arrested by police in the devastating attack. He credited radical right-winger Candace Owens for radicalizing him in a 74-page manifesto that he posted online. Law enforcement officials say Tarrant opened fire inside the Masjid Al Noor mosque in Christchurch, NZ.

Tarrant calls himself “a regular white man, from a regular family, who decided to take a stand to ensure a future for my people,” according to the manifesto. “My parents are of Scottish, Irish and English stock. I had a regular childhood, without any great issues.”

After the shooting, the New Zealand government moved to ban semi-automatic weapons.

According to the Associated Press, the organizers of New Zealand’s largest gun show say they have canceled the event to show respect for victims of the Christchurch massacre and because of “elevated security risks.”