WATCH: Shaq explains how he went from ‘homeboy investments’ to multi-million dollar deals

The NBA champ is the first African American on the Board of Directors for Papa John's Pizza. 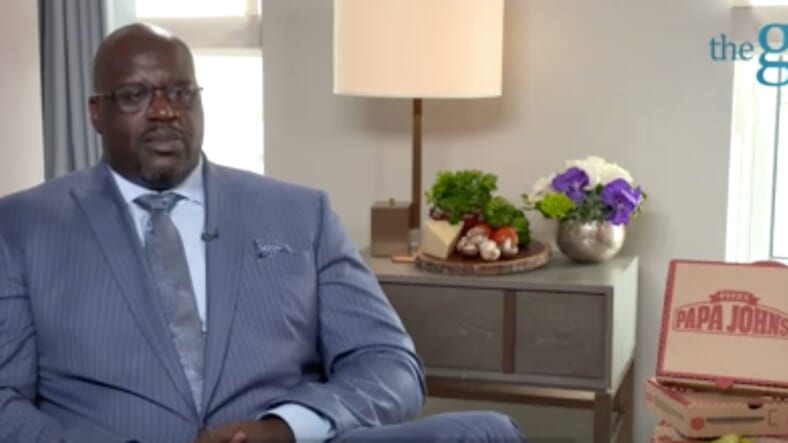 In a new interview with theGrio, Shaquille O’Neal (Shaq) reveals how he has managed to keep his bank account flush post-NBA retirement.

The four-time NBA champ recently announced that he will be joining the board of directors of Papa John’s Pizza, the first African American to hold such a position with the company. Shaq will also invest in nine locations in Atlanta and be a brand ambassador. For that, the NBA Hall of Famer will pocket more than $8 million. Shaq has already proven to be good for business. Forbes reports that Papa John’s stock rose six percent when Shaq’s new role was announced.

The Papa John’s deal is the latest big money move for Shaq, who has numerous other restaurant investments and is the face of everything from Icy Hot to Gold Bond. He’s also a fan favorite as a sports analyst on TNT’s Inside the NBA.

Over a steaming hot box of Papa John’s pizza, Shaq kept it real with theGrio about his decision to join the brand in the wake of the former CEO’s n-word controversy last year  and he offered insight into how he’s managed to dodge the financial woes that have besieged some other retired athletes.

Watch the interview to find out why Shaq initially turned down being on a box of Wheaties, what it was like to be 19 years old with $10 million in the bank, and the advice Magic Johnson gave him that helped him move from “homeboy investments” to lucrative ventures with long money for generational wealth.

Also if you’ve been dying to know which cereal gets Shaq’s vote of approval, you’ll finally have the answer to that burning question.

READ MORE: Jordan Peele’s ‘Us’ on track to set a new record, earn the top movie debut for an original horror flick