Steph Curry may have some competition. 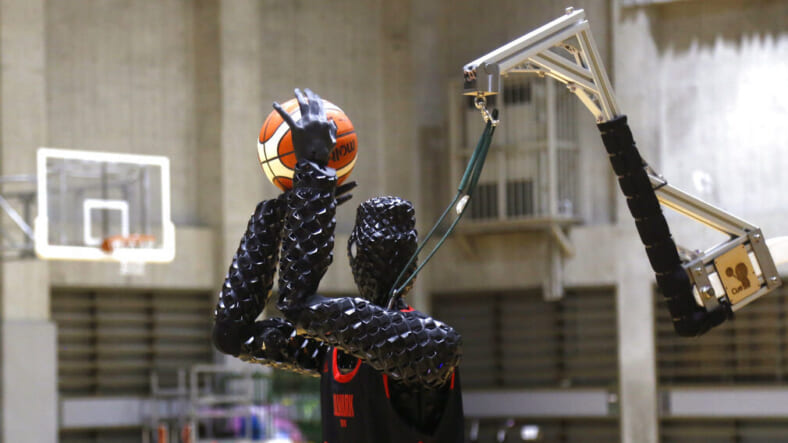 Toyota’s basketball robot Cue 3 demonstrates Monday, April 1, 2019 at a gymnasium in Fuchu, Tokyo. The 207-centimeter (six-foot-10) -tall machine made five of eight three-pointer shots in a demonstration in a Tokyo suburb Monday, a ratio its engineers say is worse than usual. Toyota Motor Corp.’s robot, called Cue 3, computes as a three-dimensional image where the basket is, using sensors on its torso, and adjusts motors inside its arm and knees to give the shot the right angle and propulsion for a swish.(AP Photo/Yuri Kageyama)

Sci-fi meets basketball thanks to the Cue 3 robot that can shoot three-pointers and free throws with precision.

On Monday in Fuchu, Tokyo, Toyota Motor Corp. demonstrated just what the six-foot, 10-inch-tall basketball robot could do and the machine was able to shoot five of eight shots from the foul line. The engineers say Cue 3 was having a bad day and usually shoots better than that on average.

The basketball robot has sensors in its torso and adjusts and shifts its arms and knees to get in position to make the perfect shot, 11Alive reports.

There’s a shift to design robots to do everyday human activities, making them functional in the real world with the ability to interact with humans, outside of just operating in factories.

“We human players are still better for now,” admits Yudai Baba, a basketball player who may represent Japan at the 2020 Tokyo Olympics.

According to Toyota, Cue 3’s name represents the idea that technology can serve as a “cue,” or signal great things to come.

The Cue 3 robot’s sensors and visual feedback helps it to shoot hoops. The robot’s vision system, enables it to calculate the ball’s path then execute the shot, said Khatib, who directs the university’s robotics lab.

Japan has been on the forefront of developing “humanoids.”

Other robots demonstrated playing a violin, yet another mimicked R2-D2 of Star Wars and could slide around and pick up objects.

While Cue 3 couldn’t slam dunk a ball or run and jump, that day when it can is coming.

Tomohiro Nomi, a Toyota engineer who worked on Cue 3, says such an achievement could be met in about 20 years.