OPINION: Hours after the death of Nipsey Hussle, images of his last moments thoughtlessly flew across the socialverse. But they were a failure to consider some important concepts 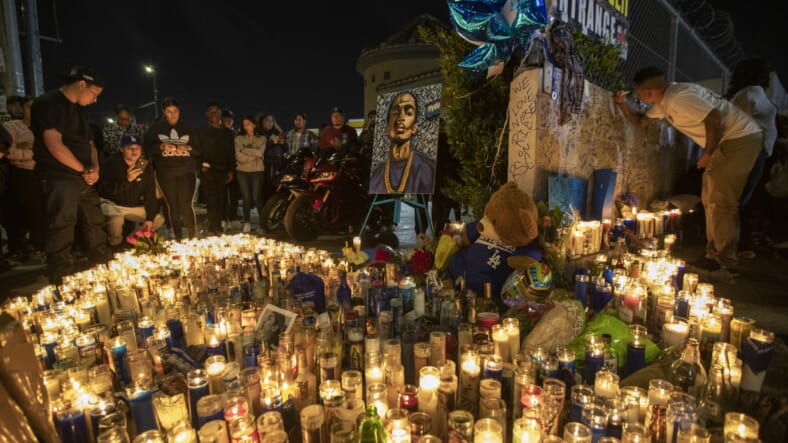 As someone who has just recently moved to Los Angeles, it was particularly sobering to walk the streets of this city in the hours after the news came of the fatal shooting of Nipsey Hussle. There was a grief and a stillness in the air that was so heavy it threatened to swallow us whole.

His death sent shockwaves across a nation of fans of a man who was not just a father and loving partner, but also an activist, an entrepreneur, and local hero to the L.A., communities that held his heart.

But before we could even wrap our minds around the enormity of what happened, I started to get wind that there was a video circulating on social media of the exact moment Nipsey was murdered.

The friend who told me about it was clearly distraught. But when I asked where she’d come across it – rather than send it to me, she just said I’d probably run across it under his hashtag on my own soon enough and left it at that.

Her restraint in that moment immediately struck me.

Someone had shared something with her that traumatized her, and here she was actively choosing not to do the same to me. There is a thoughtfulness in that gesture that is a lot more rare than it should be.

Over the next few days, more and more people began to complain about their feelings of unease and gut-wrenching sadness after seeing not just the graphic video of Nipsey’s shooting but also the clip of his life partner Lauren London shouting “Is he ok?!” as she rushed into the hospital.

And in an effort to empower (rather than scold), below I’ve compiled a quick check list of five things to consider BEFORE posting graphic pictures and videos on social media.

Are there children involved?

Sharing obscene images that involve children is a bad look all around.

This by far should be the easiest metrics to deter anyone from reposting gruesome content, but for some reason it still seems to go over people’s heads.

Right before Nipsey’s murder he took a picture with a small child, and moments later he was lying bloody on the ground. So now a split screen image of him smiling next to this minor one minute and then laying dead on the ground moments later is all over the internet. And what’s worse is some folks don’t have the decency to even blur the kid’s face out.

We all know that childhood trauma is the sort of thing that will literally follow you around for the rest of your life. So if you have no other boundary when it comes to what you share, at the very least consider this one.

Is someone being sexually assaulted or violated?

Being sexually assaulted is soul shattering enough without then having that assault played over and over for millions of strangers. Much like the point about protecting children, this too seems like an obvious cause for discretion.

Yet for some reason, the same viewing audience that watches marathons of Law & Order: SVU every weekend, somehow doesn’t see the painful irony of them sharing gruesome clips of sexual violation.

Case in point: there was an incident a few months ago where a young woman in Atlanta was drugged and raped on the dance floor of a nightclub. And the morning right after it happened, everyone and their mother was tweeting out the Facebook Live stream of her attack, as if the victim wasn’t an actual human being who had just been assaulted a few hours earlier.

How would you feel if that was your loved one?

I once had a favorite gif of a woman collapsing in shock, that I used to always send as a response to surprising news. It was funny and gave me and my friends a chuckle, so I saw no harm.

But then last year while researching a piece for work, I came across the actual full length video that gif was taken from. It was a news story about a mother, standing at the side of the road as an officer explained to her that her child had been killed by a drunk driver.

Turns out my favorite gif, was actually a snapshot of the most heartbreaking moment in that women’s life. And suddenly it was no longer funny.

I share this story to illustrate just how quickly (and at times naively) we dismiss people’s humanity when it comes to the stuff we acquire and disperse to our friends online. While you can’t research every little thing that comes your way, it’s wise to still remember that there are actual people behind all those popular clips, videos, etc.

So if you find yourself about to share something that you would hate to have shared about you, that may be a good reason to refrain. The Golden Rule works on the internet too. And we’re all just one viral moment away from being a Twitter meme ourselves.

Is this image exploiting a marginalized group?

I could write a whole stand alone piece on why that is, but in short – if you support, champion, or are yourself a member of the Black community, it would behoove you not to feed into a dynamic that makes the world accustomed to seeing us as nothing more than slain cattle.

Nipsey lived his life with dignity, a dignity many of his alleged “fans” unwittingly took part in robbing him of just so they could get likes on their page.

Wow. Sending love and strength to his partner Lauren, his kids, and the rest of his family/friends. What an awful thing to happen (and in front of his child).

What is your intention?

I let him speak, and once he was done I simply responded, “You could have done all that without sharing that video. Or at the very least included a trigger warning so people had a choice IF they wanted to see it or not.”

To his credit, he conceded this was true.

In fact, we here at theGrio collectively take a hard stance on this. When someone has been violated and there’s “footage” we don’t embed it in our stories. Instead we cite our sources, explain what happened in the text of the piece, and let the audience decide just how much explicit content they have the bandwidth to endure (by searching elsewhere).

That is what it looks like to educate with the intention to inform.

But sending a #RIP message in one breath while exploiting someone’s last moments in the next, sends a mixed message of which we all need to be aware. Especially because the families of the people impacted by these tragedies have wifi too, and they’re watching.