People are questioning why pastors like John Gray own $5,000 sneakers. 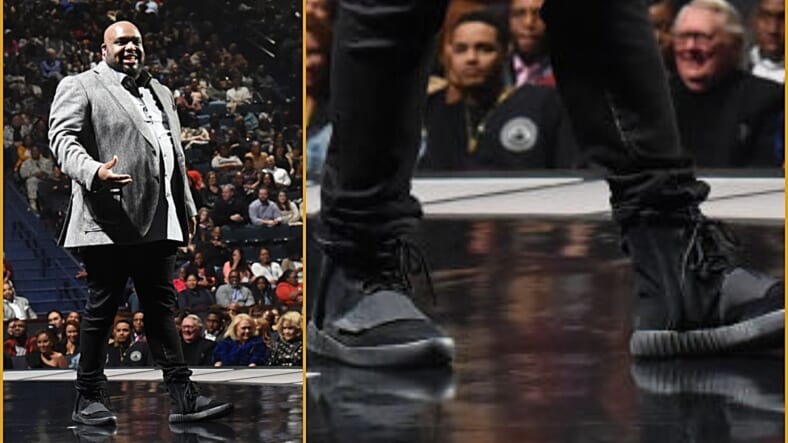 A popular Instagram account is posing the question, “Bad and Boujee? More like God and Gucci” and has social media in a frenzy showcasing high-priced shoes and the pastors who parading around in them while preaching in the pulpit.

Not only does PreachersNSneakers try to answer that question, but they also provide details about the footwear including the expensive price tag attached and it has some people clutching their pearls. Fans of site continue to comment about these examples of God’s servants decked out in shoes that cost thousands of dollars when most church parishioners can’t even imagine those blessing for themselves, Yahoo reports.

READ MORE: Chicago prosecutor Kim Foxx questions if race is a factor in public bashing over the Jussie Smollett case

The account, which has garnered over 96K followers in just two short weeks, is run by Tyler Jones (likely an alias) who has been sharing images of a number of fancy-feet celebrity pastors including Pastor Rich Wilkerson Jr. (who officiated Kim and Kanye West‘s wedding) and Pastor Judah Smith, who is friends with Justin Bieber. However, most notable is Pastor John Gray  who faced abundant criticism after purchasing a $200K Lamborghini for his wife’s birthday, after an alleged cheating scandal with another woman.

@realjohngray icing EVERYBODY out in the Prayer Yeezy 2s. Ayo Kanye, I’m about to start raising support, COME THRU for ya boi

A post shared by PreachersNSneakers (@preachersnsneakers) on Mar 29, 2019 at 1:28pm PDT

“Pastor @realjohngray steppin out something MAJOR in the Ye’vangelical Red October,” Jones wrote on the PreachersNSneakers IG.

What started as a way to troll these pastors and laugh amongst his friends, Jones said has quickly amassed into a cult following. It’s even put some things into perspective for a few pastors.

Chad Veach, founder of Zoe Church in Los Angeles commented after Jones made mention of his $1,980 Gucci backpack and $794 Rhude track pants.

“Wanna know what’s crazy? I legit did not pay for one thing i am wearing [sic].Is that wild to you? that’s wild to me… Thanks for the shout out tho. You’re a blessing,” Veach said in a comment, which was later deleted.

Jones said while he’s not instigating or insinuating anything specific, he wants parishioners to be informed on what their pastor spend money on.

A post shared by PreachersNSneakers (@preachersnsneakers) on Apr 6, 2019 at 6:04am PDT

“I’m not trying to cause a division; me and him both believe inherently the same things. I just think that if you’re in church you should know how your pastor is spending the money,” Jones said.

Jones created the account because he has a love for sneaker culture and Christianity. He said he came across the band Elevation Worship’s page and saw that the lead singer wore a pair of Yeezy 750 Boost sneakers, which typically retail for up to $1,800.

From there, Jones said he perused pastors’ pages and just like that, his Instagram page was born.

“I’ve had hundreds of pastors and people in ministry message me like ‘Thank you, keep doing what you’re doing. It’s prompting a discussion around what leadership and stewardship look like within the church,’” Jones told Fashionista.

“Somebody called me a hypocrite today and said that I was causing disunity within the church. But, I’ve been pretty intentional to leave it relatively open-ended,” he said.

As for what Jones believes Jesus would do today with this level of technology at his fingertips and the ability to order sneakers on demand?

“I think he’d probably be wearing some open-toe Birkenstocks on a standard day. Then maybe if he was hanging around the house, he’d be wearing some Air Max 1s that he bought from the outlet.”