OPINION: Why the new train wreck film ‘LOQUEESHA’ about white man pretending to be a Black woman is nothing more than a masterpiece of liberal racism 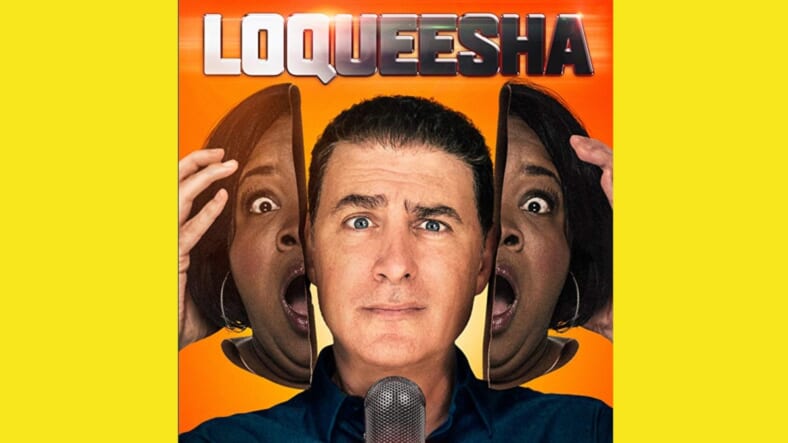 During a time when most of us feel like we’ve already seen everything, this weekend writer/director Jeremy Saville somehow managed to drop a trailer for a movie so bad and so offensive, that even the more complacent sections of Twitter sat up and took notice.

The teaser was for an ill advised movie named LOQUEESHA, and starts off with Saville (who also stars in the film as Joe) and comes off as a broke man’s Jerry Seinfeld. Like most parents, he wants the best for his son and that includes the expensive private school education he seems not to be able to afford. To secure some extra cash, he starts to listen to other people who fall for his unconventional advice and suggest he consider doing a radio talk show to help the masses. Unfortunately for our hero it’s really hard for straight, cis gender, white men to get a job these days, and so he decides to pretend to be a neck-rolling, “Hey girl, hey!” screaming Black woman in order to book a gig at a local radio station.

From that point on, the movie basically devolves into a blatant modern day minstrel show where the casting call for people of color seems to have been, “If you’re willing to be as ghetto, stereotypical, and one-dimensional as possible, we’d love to have you!'”

READ MORE: Steve Harvey on being dropped from two shows: ‘I can’t wait to see what God got for me on that other page’

Even the Popeye’s Fried Chicken lady would have given some of the performances in this racist train wreck the side-eye. Much like many of the attendees at the MET Gala this year, the filmmaker’s attempts to come off as “camp” fell embarrassingly short.

Y’all see this “Loqueesha” film trailer? Did white folks really think that this neo-minstrel movie was a good idea? https://t.co/t2DKiixKsP

The question remains, how does this happen? How does the trailer for a movie like LOQUEESHA go viral while actual gems like Gugu Mbatha-Raw‘s new sci-fi thriller Fast Color seemingly slip into an abyss of obscurity?

The answer is simple: This is what happens when we let white liberals get too comfortable.

Let’s be real, how many of us have met white people who proudly call themselves allies simply because they’re Democrats, gay, women, or part of some other marginalized group? Then we’re shocked when we watch them do deeply problematic sh** that would get a Trump supporter dragged by their edges?

How many times do we bite our tongues and let these instances slide as if it’s okay?

The ugly truth is, all those free passes are what continue to embolden people like Saville to make this dumpster fire of a movie, which is slated to be released this summer on July 12th.

In his press release, his team writes, “LOQUEESHA is the hilarious and heartwarming story of Joe, an astute and underachieving Detroit bartender who values truth above everything.”

“With a diverse cast of breakthrough actors, LOQUEESHA takes viewers on an unexpected and thought-provoking journey that challenges society’s—and our own—conventional beliefs about identity and perception. Deftly navigating the prevalent themes of race and gender in our culture, LOQUEESHA reminds us that, in the end, our personal truth is all that matters. Well, that and a good laugh.”

That summation couldn’t have possibly been any more smug or delusional. This idiot is so convinced that he’s “not one of those types of white guys” that it ironically inspired him to create a sheer masterpiece of pure racism.

What in the blackface HELL is this?!!! —-> “Loqueesha is the hilarious and heartwarming story of Joe, an astute and underachieving Detroit bartender who values truth above everything” who “invents a larger-than-life black female personality named Loqueesha” https://t.co/e5W6TqVifE

There are so many things wrong with this film. The title alone is a thinly veiled attempt to mock the “ghetto” hood names that white people use as a marker of what they believes to be our community’s lack of refinement, decorum, or professionalism.

Then there’s the cover art which jarringly depicts a plus-sized Black women getting her head split open to reveal the inner white man just waiting to break out as the true source of her wisdom and social intelligence. If that isn’t a visual middle finger to sisters everywhere I don’t know what is.

Also, let us not forget that pivotal moment in the narrative where our protagonist comes to the epiphany that he has a Black woman living inside of him. THIS sentiment is one that I hear pretty regularly from gay white men and overly familiar white women who think their proximity to Blackness as a marginalized group somehow gives them the right to actually own some of that Blackness as well (isn’t that what the colonizers did?)

If that isn’t a visual middle finger to sisters everywhere I don’t know what is.

In fact, if you are reading this and have ever jokingly said you felt like you had a sassy, fat, Black woman living inside of you, feel free to thank Jeremy Saville for showing you in stunning detail how much of a donkey you’ve been acting like all along.

I’m going to help everybody out the best I can by identifying several ear-markers of a “problematic white liberal” (let’s call them PWLs for short).

The most common attribute is their conviction that because they are not Hitler, a MAGA Trump supporter or a member of the Ku Klux Klan, this somehow makes them completely immune to an entire lifetime of programming and racial biases spoon fed by a system built on white supremacy.

PWLs love to tell you they can’t be problematic because they voted for Barack Obama. If that doesn’t work, then PWLs point to their “Black friend” who is somehow supposed to serve as a designated negro sponsor, who is capable of granting said PWL permission to do whatever offensive ish they want (without repercussion).

Case in point…in response to the epic Loqueesha backlash that any sensible person could have seen coming a mile away, rather than apologize, Saville immediately tries to explain how WE had gotten his intention all wrong.

The alleged comedian, whose only claim to fame is an appearance as an extra in ONE episode of Modern Family, chimed in during the social media firestorm on his personal Twitter account. First, he compared his project to the 2004 Wayans brother hit, White Chicks where Marlon and Shawn Wayans both wear whiteface in drag. He even included a blurry selfie of him with Marlon as if to shout to the world, ‘hey this Black Hollywood vet agrees with my current project’s premise.’

In a perfectly timed response to the tweet, Wayans eloquently responded, “I hate when people tag me in their bullsh*t. It’s annoying as f**k.”

Yes Marlon, it is annoying AF when white people assume that if they are no where near threatening to lynch Black people, that suddenly means they’re incapable of being just as tone deaf as their cousin Susan who voted for 45.

To paraphrase a line from an episode of Issa Rae‘s Insecure, “The worst type of f**boys are the ones who’ve convinced themselves they’re not f**boys.” The same argument could be made for many PWLs who are quick to confront their friends and family while completely refusing to look in the mirror, because unlike more blatant racists, they actually get access to a lot of our sacred spaces.

Usually, I would never go off on a movie until I’ve actually previewed it, but this is one of those rare cases where I feel totally justified in judging a book by its cover. Is there any chance in hell that LOQUEESHA is a good movie? Probably not.

Does it however sum up what even some of the nicest white people you know still think is the entirety of what it means to be a Black woman? Absolutely. Which perhaps is what many of us find the most offensive thing about this film.

As poorly conceived, poorly written and poorly acted as it may be, LOQUEESHA serves as a reminder of just how big of an uphill battle remains in front of us as we continue to try to convince the rest of the world that Black women aren’t here for your cheap punchline. And, for those of you who didn’t know, just wait. Once more of us find out about this trash, better believe you will see what it’s like to try to transform us into a basic trope in 2019.