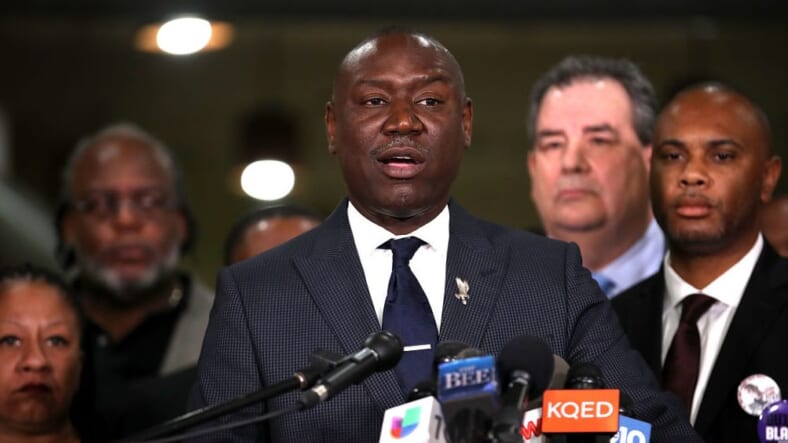 Attorney Ben Crump speaks during a news conference. Now, he’s fighting for a young girl who says studying hard and better preparation are the reasons behind her improved SAT scores. (Photo by Justin Sullivan/Getty Images)

Civil rights attorney Benjamin Crump and the NAACP on Wednesday demanded that a Florida police deputy who was caught on video slamming a teen’s head in the ground in April be charged.

“We said if the State Attorney’s Office did not do the right thing, we would be back,” said NAACP Fort Lauderdale/Broward County President Marsha Ellison at a press conference.

“We are sick of the finger-pointing. We are not asking for anything special. We are asking that [Broward Sheriff Gregory Tony] hold these people accountable who have abused their authority, who abused this young man; and we are sick of this waiting game — it is not good enough.”

Broward County Sheriff’s Deputy Christopher Krickovich is seen on the footage jumping on Delucca Rolle, 15, before slamming his head against the pavement near another teen on the ground in handcuffs. Sgt. Greg Lacerra was seen pepper spraying and brutally beating the boy.

Krickovich said in a police report that he feared for his life, as there were only three officers who were allegedly outnumbered by about 200 students “who were yelling, threatening us and surrounding us, I had to act quickly, fearing I would get stuck or having a student potentially grab weapons off of my belt or vest,” he wrote.

Crump is representing the Rolle family and said he’s dismayed about the lax effort to hold the police officers accountable.

“It has been over two months with a video, and the State Attorney still says that they don’t have enough evidence to charge the police officer for this crime against this child,” he said. “Everybody — Stevie Wonder can see it — can see that this was an aggravated assault and battery. You don’t have to have a law degree to see that these police officers violated the constitutional rights of this child.”

“We know they charge black or brown people every day with no evidence at all,” Crump says. “Why are the rules different when the police abuse our children?”

The State Attorney’s Office released a statement and said it was BSO’s fault the investigation is lagging.

“If BSO had arrested the deputies, an accelerated investigation would have ensued because legal time limits would have been imposed by the arrest process,” the statement read, adding that a decision from prosecutors is expected “very soon.”

Crump is giving them a deadline of July 4 to charge the cops or he’ll file a civil rights lawsuit with the Department of Justice’s Civil Rights Division.