John Singleton's hit series 'Snowfall' is back for season 3! 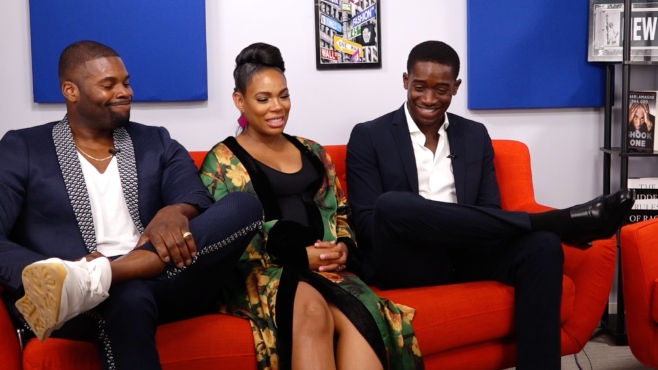 It’s been a little over two months since the world lost legendary director, John Singleton, but his legacy lives on.

Singletons’ FX hit series, Snowfall, is back promising to bring you “serious business, serious money and serious power.” The show, which centers around the 1980s Los Angeles crack cocaine epidemic, focuses on Franklin Saints’ (played by actor, Damson Idris) successful family-run cocaine business. While Saint is putting his people on financially, the drugs are ravaging the community and Sergeant Andre Wright (played by Marcus Henderson) will do whatever it takes to put an end to this criminal enterprise.

Idris, along with his co-stars Angela Lewis (who plays Auntie Louie) and Amin Joseph (who plays Uncle Jerome) sat down with theGrio to reflect on the drug epidemic that devastated and nearly demolished many Black communities in the 1980s, the lessons they learned from their beloved boss, John Singleton and much more.

theGrio: After being a part of Snowfall, now going into season 3, what have you learned about L.A.’s drug epidemic in the 1980s?

Damson Idris:  A lot of my research involved walking down Skid Row and obviously looking at how people lived, the culture, and pop culture in the early 80s. The thing that hit me the most was that South Central, although it had its problems, was a working-class neighborhood. You know kids were playing in the street. There weren’t bars on the windows and you see that in the opening scene with the ice cream truck. It’s like a beautiful community and then it becomes so sad as soon as this bomb—crack cocaine—hit and then everything changed. Bars went up, moms were leaving their children…I just don’t believe anyone would have got into crack cocaine if they knew what it would mean today.

Angela Lewis: I learned two things. One: The epidemic hit all the major cities in our country at different times, but pretty soon it [was] like that domino effect and, so because of that, we all have a very similar experience. What is happening in Snowfall happened in Detroit. It happened in Chicago. It was just a reminder that we’re all the same.

The other thing I learned is that we judge each other too quickly. We rarely look at the human beings behind the devastation of this drug. I learned that a lot through Louie. I was thinking how am I going to play this character. I don’t know [anything] about this, but then it was like, I know that person. I know that scared little girl who’s been abused her whole life. I mean I wasn’t abused, but I know the heartbreak. I know being underestimated all the time. I know being told ‘no’ consistently. A dire situation has caused [Louie] to behave in a way that maybe I would have if my situation had been just like hers.

Amin Joseph: Our audience—we judge the content before we see it sometimes. This is a show that has historical relevance. It’s a story that needs to be told so that we don’t repeat history. I’m a bit annoyed when I hear,’Oh, this is just another drug drama or this is about the glorification.’ Walter Mosley and John Singleton have way too much integrity to just put something like that out. This is a show that we need to take seriously. We don’t always get these type of shows, so when we do, we should embrace them.

theGrio: What was your most memorable moment working with John Singleton and what one lesson did he teach you that will stay with you throughout your career.

Damson Idris: I’ll say the that he gave me which was that everyone you meet on the way up, you’ll meet on the way down. You really need to show humility to everyone and that was really the greatest thing about John. He never compromised his integrity and he always met people and took them for who they were and not for their status. It was about the inner beauty of people.

Angela Lewis: I invited him to my birthday party. I didn’t think he was going to come. I was like, ‘you coming?’ He said, ‘Yeah, I’m coming.’ Just to have that camaraderie with him and not have to be like John Singleton all the time. He was just John and that meant a lot to me.

Amin Joseph: My favorite John Singleton moment was at the Schomburg Museum in Harlem. A guy raised his hand to ask a question and he challenged the authenticity and the moral validity of the show. John said, ‘Hold on for a second. I made a movie back in the day called Rosewood. I’ve been speaking truth to power forever. I’m the first one to do this.’ We see his legacy through the many people John Singleton has put on in this business. He knew how to talk to people. He knew how to defend his craft. He knew how to defend his content because he came from a real place.

Watch the full interview for more with the cast of Snowfall and catch the season premiere on July 10 at 10 PM ET/PT only on FX Networks.