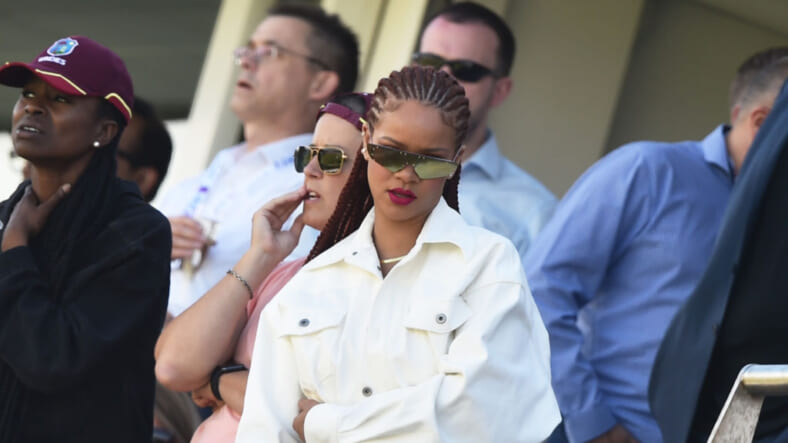 Singer Rihanna watches during the Group Stage match of the ICC Cricket World Cup 2019 between Sri Lanka and West Indies at Emirates Riverside on July 01, 2019 in Chester-le-Street, England. (Photo by Nathan Stirk/Getty Images)

Rihanna is a style maven in her own right but some folks are calling out her latest cover look as completely wrong.

A photoshoot with Harper’s Bazaar China has people accusing the singer and beauty boss of cultural appropriation for wearing traditional Asian-inspired garb for a unique photoshoot, The NY Daily News reports.

“I am asian and I find it offensive,” one Instagram user wrote on the Harper’s Bazaar China’s page.

“If you wanted to create an Asian look why didn’t you invite asian artists?” the commenter asked.

Another person wrote: “THIS IS A TOTAL SMACK IN THE FACE TO THE ASIAN CULTURE.”

Earlier this year Rihanna made history as first woman of color to helm own fashion line with LVMH, becoming the first woman to create an original brand at the famed fashion house. Others defended Rih Rih’s fashion sense saying she was giving props to Asian cultural with “cultural appreciation.”

Harper’s Bazaar China wrote on Instagram that the cover photoshoot was to show “when western style icon meets eastern aesthetic.”

While Rihanna has yet to comment to the criticism, she surely is enjoying the success 2019 has brought for her and her fans.

This year, the singer broke new ground with Fenty after securing a deal with LVMH Moët Hennessy Louis Vuitton.

“Everybody knows Rihanna as a wonderful singer, but through our partnership at Fenty Beauty, I discovered a true entrepreneur, a real C.E.O. and a terrific leader,” Bernard Arnault, the chairman of LVMH, previously said in the statement.