Miami Dolphins' receiver Albert Wilson kicked off the season opener with his continued support of protesting racial injustice by kneeling from the sidelines. 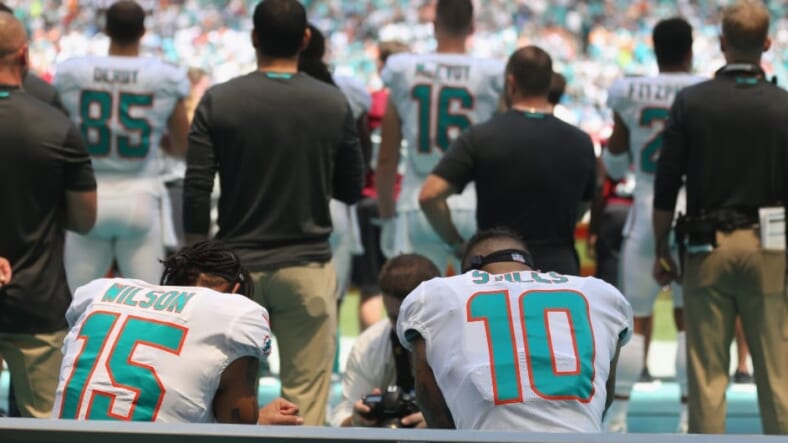 Receivers Kenny Stills #10 and Albert Wilson #15 of the Miami Dolphins sit on the bench during the playing of the national anthem prior to playing against the Tennessee Titans at Hard Rock Stadium on September 9, 2018 in Miami, Florida. (Photo by Marc Serota/Getty Images)

Miami Dolphins‘ receiver Albert Wilson kicked off the season opener with his continued support of protesting racial injustice by kneeling from the sidelines.

The Dolphins have now earned a spot in history as the team with the longest running protest in the NFL against social injustice at four straight seasons, The Sun-Sentinel reports.

—After Miami Dolphins player Kenny Stills criticizes Jay-Z for NFL deal, his coach plays all the rapper’s jams at practice—

Wilson’s protest this time however was even more personal. He explained that he was kneeling for his friend Kenny Stills, because he was traded to the Houston Texas from the Dolphins where he played for the last four years.

“I don’t feel like anything has changed. We’re protesting social injustice and police brutality,” said Wilson, who suffered a calf injury in the first half and sat out the second half of Sunday’s game. “Things haven’t changed since last year so we’ll continue to protest.”

On Monday, during his first game for the Texans, Stills kneeled too.

Still was trolled last month when he was still a Dolphins, after he criticized Jay-Z for NFL deal, and his coach played all the rapper’s jams at practice.

On Sunday, the Dolphins didn’t win against the Baltimore Ravens, (59-10), but that won’t keep Wilson from continuing Colin Kaepernick’s legacy of kneeling protests.

Dolphins coach Brian Flores is on board with backing his players, especially as a Hispanic man who grew up in Brooklyn, New York.

“Quite honestly, they’re bringing attention to my story. So, let’s talk about that. I’m the son of immigrants. I’m black. I grew up poor. I grew up in New York during the stop-and-frisk era, so I’ve been stopped because I fit a description before. So everything these guys have protested, I’ve lived it. I’ve experienced it,” Flores said.