Cyntoia Brown-Long breaks her silence on her life, her crime, and her future 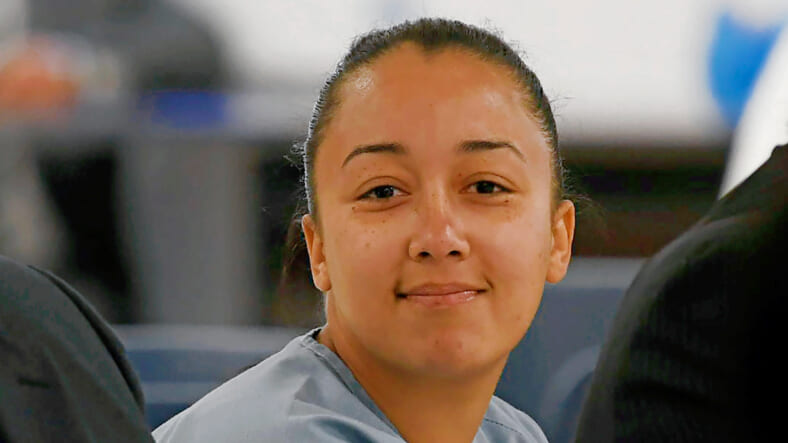 Cyntoia Brown, a woman serving a life sentence for killing a man when she was a 16-year-old has been released from prison. Lacy Atkins /The Tennessean via AP, Pool)

Cyntoia Brown-Long sits down with NBC’s Lester Holt to break her silence in her first interview since her release from prison earlier this year. Brown was previously serving life for committing a murder at the age of 16.

READ MORE: Cyntoia Brown: 7 facts you need to know about her release from prison

Brown-Long made headlines after capturing the attention of celebrities like Kim Kardashian, who advocated for clemency after learning that she was a sex trafficking victim when she was convicted in 2006 of murdering 43-year old, Nashville real estate agent, Johnny Allen. She was sentenced to life in prison.

Brown-Long admits that the spotlight cast on her case made her “nervous” that she would upset the governor and somehow hurt her case.

“Suddenly, people like Kim Kardashian are tweeting about you and raising this issue of clemency. Was there a part of you that was afraid of the attention?” Holt asked.

“…maybe it could backfire?” asked Holt.

“I was. So, like, I was so nervous. And then I was, like, “I don’t want the governor to think that, like, I’ve done this, like, to try to kinda, like, you know, push his hand. Like, that could backfire. That can look really bad.” We had actually even heard back from the governor’s counsel that, you know, the whole Kim Kardashian thing was not helping. So I was kinda fearful at first. But I had to just, like, trust that God had a plan,” Brown-Long said.

Brown-Long also opened up about the life-altering decision to shoot a man, who she believed was reaching for a gun to kill her.

Brown-Long never disputed murdering Allen and admitted to shooting him at close range in the back of the head. However, her attorneys contend that Brown was not in her right mind during the murder.

According to her lawyers, when Allen picked her up at a Sonic restaurant to have sex with her, he was acting erratically. This made Brown-Long nervous, and she fatally shot him because she was afraid. Making the situation more complicated, Brown-Long’s mother drank while pregnant with her, and her attorneys argue that the teenager may have suffered from Fetal Alcohol Syndrome, which could have impaired her judgment and mental state. She was only 14-years old at the time of the murder.

Gov. Bill Haslam granted her clemency after her case went viral and she received online support from a number of celebrities including Kim Kardashian West and Rihanna.

Now a married woman (she met her husband Jamie Long while she was in prison serving time), Brown-Long says she wants people to understand that she is so much more than the sum of her crimes.

On what she wants people to know about her:

On being released from prison and getting a second chance:

“I know there are people looking at me saying ‘okay, well what’s this girl gonna do? And is she really changed? So I feel like it’s an honor to actually be a picture of what rehabilitation looks like. Of what it looks like when we give people a second chance.”

On taking responsibility for the murder of Johnny Allen and recognizing his family’s grief:

Brown-Long served 15 years in prison for killing Allen when she was convicted as an adult at 16-years-old of first-degree murder and aggravated robbery. Without her release, she would have served time until 2055 or 51 years.

While in prison at the Tennessee Prison for Women Brown-Long made good use of her time, earning both an associate’s and bachelor’s degrees, thanks to Lipscomb University’s LIFE program.

Brown-Long will appear on TODAY Tuesday morning for her first live interview. Her husband will also appear for their first joint interview on the 3rd Hour of TODAY.