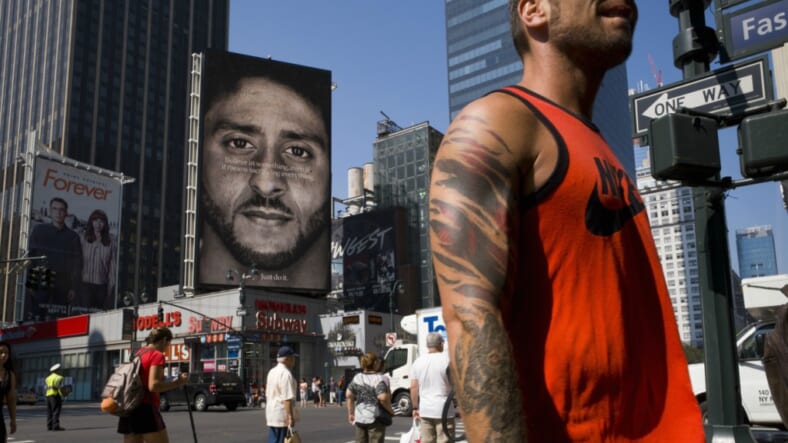 This week, video of a pro-Black football fan peacefully standing in solidarity with Colin Kaepernick during a Green Bay Packers game surfaced on the internet. But once the clip went viral followers couldn’t help noticing the visibly displeased white woman standing behind him.

Monday, a Twitter user by the handle @cooly_roc posted a video taken Sunday during a game where the Packers faced the Oakland Raiders.

While the University of Wisconsin marching band played the national anthem for the stadium of spectators, one Black man, dressed in a black Kaepernick jersey, wrapped a bandana with the colors of the Pan-African flag around his hand and raised his fist.

“Oh yea we ain’t forget about you too @Kaepernick7!! We ride for you cause of your sacrifice for riding with the people! ✊?” read the tweet caption that was posted with the video.

Oh yea we ain’t forget about you too @Kaepernick7 !! We ride for you cause of your sacrifice for riding with the people! ✊? pic.twitter.com/Oxxegmm2XY

The raised fist hand gesture has long been a symbol of Black empowerment, and given his attire, the meaning behind his actions were clear. While most people in attendance at the game seemed nonplussed, if not totally unaware of the silent show of support for the free agent quarterback, one Packers fan behind the man was clearly annoyed.

In the clip, a woman with blond hair and sunglasses can be seen giving the Kaepernick supporter the middle finger as the anthem plays, and then sneers in disbelief while talking to her friend, before quickly pulling out her red cellphone to take a picture of him.

“They’re going to find her,” predicted one Twitter user. “She gets fired from her job for being a racist. Then she’ll come on Twitter or Facebook to apologize. Happens every two weeks.”

“See God don’t [sic] put me situations like this because I would’ve had to drag sis down them bleachers,” chimed in another.

While the irritated woman may not have been a fan of the moment, the post was quickly shared all over social media with singer Tyrese Gibson even chiming in to applaud the unidentified man.