Millennial from viral video was called the "n" word while being ejected, even though he is white 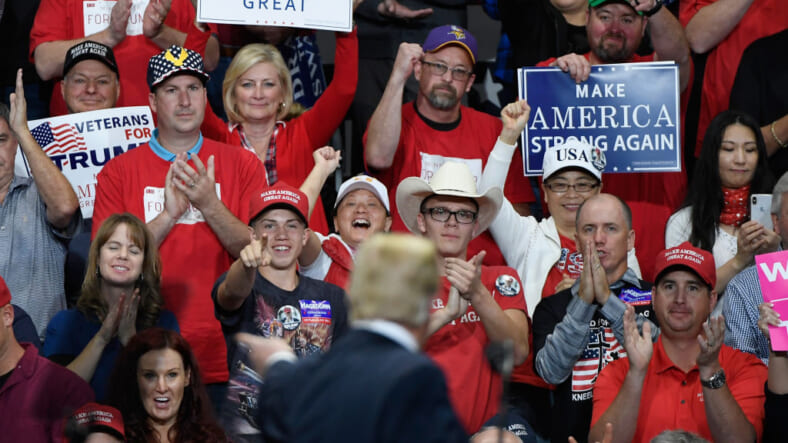 MINNEAPOLIS, MN - OCTOBER 04: The crowd reacts as US President Donald Trump speaks at a campaign rally on October 4, 2018 at Mayo Civic Center in Rochester, Minnesota. Trump is holding rallies across the U.S. ahead of the midterm elections November 6. (Photo by Hannah Foslien/Getty Images)

On Thursday, Paul Eugene soon learned that the ideals of freedom this country was built on aren’t shared by everyone.  During a Trump rally in Minneapolis,  the millennial was thrown out for wearing a Colin Kaepernick jersey.

The 23-year-old dared to enter a 2020 presidential campaign rally for Donald Trump with the jersey on representing the former quarterback who Trump has targeted and heavily criticized for kneeling during the national anthem, a form of protest against police brutality.

Despite the fact Trump rallies have been known to be breeding grounds for hate, Eugene said he wanted to make a point “without having to say much.”

It “was an easy way to send a message, without having to use too many words,” he told TIME.

He was still kicked out of the Target Center.

Trump previously launched a nasty attack against the former NFL quarterback in Alabama saying “Get that son of a bitch off the field right now. Out! He’s fired. He’s fired!’” That rally, in particular, was for a Republican senator, but Trump has gone on a tirade against Kaepernick numerous times.

Kaepernick took a stand and kneeled in his first pre-game protest of racial injustice and police brutality. Since then he has endured getting “blackballed” by the league and settled this year after he filed a collusion suit against the league.

“[Kaepernick] essentially gave up his whole career to fight for the things he believed in,” says Eugene, a self-proclaimed “political operative”.

“We’re talking about a candidate who thrives off of white males who feel that their privilege is being threatened by minorities, women, all of that stuff,” he said about Trump.

“A Black man willing to use his platform to step up and speak out on a lot of the atrocities that are committed across this country on a regular basis, it scares them. It’s everything they fear. They’re losing their control and their upper hand.”

“I can’t walk around and talk to every Trump supporter and have them feel what I’m saying,” says Eugene. “But there is power in imagery and power in symbols. Kaepernick has become one of those symbols.”

On Friday, the video of Eugene getting ejected went viral.

He said his jersey was covered up by a jacket. During one point of Trump’s speech, Eugene said he started laughing and that’s when Trump’s minions attacked and said one man threatened to hit him.

In response, he shot back, “I dare you.”

“I wasn’t laughing any louder than people were cheering,” he says. “Sure, it was audible. But it wasn’t an act of aggression in any way.”

The Trump supporter, he said, called over security who then “uninvited” him from the rally event.

On his way out, Eugene said he was heckled with nasty comments, like “f–k Kaepernick,”  and another person, he said, called him a “n*gger” even though he’s white.

Eugene says to those who believe he deliberately wore the Kaepernick jersey to pick a fight, he says, “They can say what they want.”