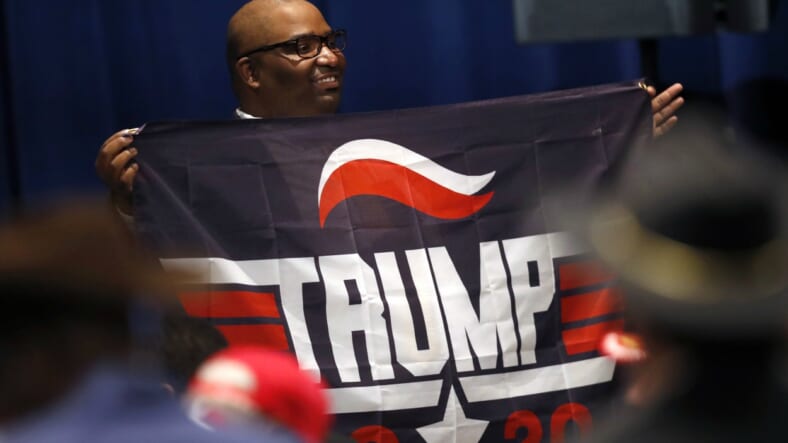 A supporter of President Donald Trump holds a Trump campaign banner as he waits for Trump to arrive for Black Voices for Trump rally Friday, Nov. 8, 2019, in Atlanta. (AP Photo/John Bazemore)

In a turn some may find ironic, Donald Trump’s team has kicked off an election season effort called “Black Voices for Trump,” — in the Black cultural magnet city of Atlanta.

According to The Washington Post, on Friday, the campaign launched the “Black Voices for Trump” initiative, directing efforts toward recruiting African American Trump supporters, which kicked off with an elite, invitation-only event with a crowd of mostly Black conservatives, some of whom wore “Black Lives MAGA” hats.

Amongst the hundreds in attendance were former presidential hopeful Herman Cain,  Martin Luther King, Jr.’s niece Alveda King and former state legislator Melvin Everson.  After boasting about the economic gains and criminal justice reform that’s taken place under his administration, Trump mused about how the Democratic party is a bad habit that Black Americans need to free themselves from.

READ MORE: Donald Trump delivers keynote at an HBCU to let us all know how much he cares about criminal justice reform

“To keep America great, we need all of you to lend your voice,” Vice President Mike Pence chimed in at one point. “African Americans and every American need four more years of President Donald Trump in the White House.”

Trump has spent much of the last four years engaged in racially charged attacks, going after minority members of Congress, claiming “no human being” would want to live in “rodent-infested,” majority-minority Baltimore and insisting there were “very fine people on both sides” of the deadly Charlottesville protest against white supremacists.

Before launching the new effort, Trump met with supporters at a fundraiser that was expected to raise about $3.5 million for a joint committee benefiting the Republican National Committee, the Trump campaign and the campaign of Sen. David Perdue, R-Ga. Nearby, a small group of protesters chanted, “Lock him up!”

In 2016, six percent of Black voters supported Trump, according to a Pew Research Center analysis of people who participated in its polls and were confirmed to have voted. There is no indication his support is growing. Polling shows that African Americans continue to be overwhelmingly negative in their assessments of the president’s performance, with his approval hovering around 1 in 10 over the course of his presidency, according to Gallup.

Yet Trump’s campaign dismissed the numbers, insisting the campaign has seen favorable movement and arguing the president can increase his margins with black voters by bringing new people into the fold.

“The polls have never been favorable for Trump, and the only poll that matters is on Election Day,” said senior campaign adviser Katrina Pierson.

The campaign has launched similar coalitions for women, Latinos, and veterans.

“It takes a lot of courage to say you’re supporting Trump,” Urban Development Secretary Ben Carson told the crowd. “Today, they say if you are a conservative, you’re somehow an Uncle Tom, you’re a horrible person, a demon. What a bunch of crap.”

READ MORE: Trump Jr. gets personal with Joy Behar on ‘The View’, accusing her of wearing blackface

These are some of the great @realDonaldTrump supporters that the media does not want you to know about. Proud to join @POTUS and so many folks at the Black Voices for Trump coalition today in Atlanta. #KAG pic.twitter.com/pAogvm90VS

“We need you to reach out to your friends, your neighbors, your churches,” Trump said. “We’re going to campaign for every last African American vote in 2020…We’re going to make 2020 a year of change in Black communities all across the country.”