Julián Castro: ‘I have the strongest vision for Black voters’

He may be down but he certainly is not out.

Although the pool of Democratic candidates in the 2020 Presidential race continues to expand to ridiculous proportions, there is in fact, one candidate whose presence was missed from last week’s debate in Atlanta.

Former Secretary of Housing and Urban Development and San Antonio Mayor Julián Castro is the only Latino candidate in the hodgepodge of choices available and he doesn’t want voters, especially those who are Black and Brown, to forget that he’s still very much in this fight. Although he didn’t meet the financial or polling criteria for the November debate, Castro is still pushing forward to secure his place on stage in December and beyond.

He knows it won’t be easy, but he’s counting on support from the biggest ethnic group voting bloc in 2020, particularly as he details one of the most progressive immigration plans of any of the Democratic candidates. He calls it the People First’ Immigration policy which would protect Dreamers, their parents, those seeking asylum and others who are undocumented but have successfully contributed to the country.

Then there are the promises Castro has made on reparations if he becomes President, particularly creating a special task force that would explore the possibility of economic remuneration to the ancestors of Black American slaves.

Addressing these and other critical issues, Castro spent time on Sunday in Iowa (a key state) to meet supporters and continue to raise money and his presence in America’s heartland. He also hopes to stay long enough to meet the filing criteria to be on the ballot for the 2020 South Carolina Democratic Primary in February, a state where mostly Black voters will actually get to have their say. The application and $20,000 fee are due by December 4.

In a telephone interview with theGrio, Castro’s tone is soft and selective, but resilient and determined as he talks about why he’s the right Democrat to push Donald Trump out of the ivory tower, once and for all.

TheGrio: First of all, how are you? How has campaigning across America been for you?

Julián Castro: I’ve gotten more used to waking up at 4:30 a.m. to take early morning flights. The hardest part is being away from my daughter, Carina who’s 10 and my son, Cristián who is four and will turn five at the end of the month. You get used to it after doing it for 10 or 11 months. The best part is that I’ve met so many people along the way who have expressed their hopes for their families and for the country. And people who have been very inspiring.

TheGrio: Both Mike Bloomberg and Deval Patrick have recently joined this race. In an already crowded Democratic field, what are your thoughts about them coming in so late and how are you planning to remain a viable contender?

Julián Castro: There’s no question at all that this has been a different kind of primary season. With the candidates who have been around, the new candidates just getting in, the threshold the DNC has put in place and then the craziness of the Trump administration playing out in the background, it has been unique for sure.

Our campaign continues to work hard to get out our message to as many people as possible and to build up support in these early states, especially in Iowa, Nevada and then go on to South Carolina. We’re just trying to work hard and build up our support.

TheGrio: You weren’t at the debate last week because you didn’t meet the financial and poll thresholds. How are you planning to change that for December’s debate in Los Angeles?

Julián Castro: We’re working hard toward the donor threshold. I believe that we will make that and we’re doing what we can to increase name I.D. and get the word out to move up in the polls by December 12, which is cut off.

The polling threshold is a little bit different because there’s no way to directly impact that short of spending millions of dollars, which has been done. We are doing everything we can to get the word out and strengthen our outreach and I feel good that in the last few weeks.

More people have gotten my message, ironically even though I wasn’t on that debate stage. People are taking note. The entire push of this campaign, which is that we need to build an America where everyone counts and that I’ve been speaking up for a lot of people who often are not spoken up for — people who are forgotten, people who are poor or people who are cast aside.

TheGrio: Why should Black voters believe that you to beat Donald Trump?

Julián Castro: I have the strongest vision for the future of our country when it comes to Black voters, especially when we’re talking about investments we need to make in better educational opportunities when so many schools need tremendous improvement. I haven’t been afraid to take on issues that just about every other candidate doesn’t want to touch like police reform and to do it in a blunt and truthful way because it needs to be done.

I wasn’t afraid to take on the issue of reparations, even though some people said, ‘hey, just leave that alone.’ I’ve laid out a plan for how we’re going to make sure that lead is no longer a major public health threat. I’ve been speaking powerfully to so many of the issues that many Americans, but especially Black Americans, face on a daily basis. Maybe most importantly, I have a very strong track record working to boost opportunities for African Americans.

When I was mayor of San Antonio, one of my biggest efforts was on the east side, which traditionally has been largely African Americans, to improve the quality of life for people and neighborhoods. Because of our work, San Antonio got a Promise Neighborhoods grant, a Choice Neighborhood grant and other federal funding under the Obama administration. 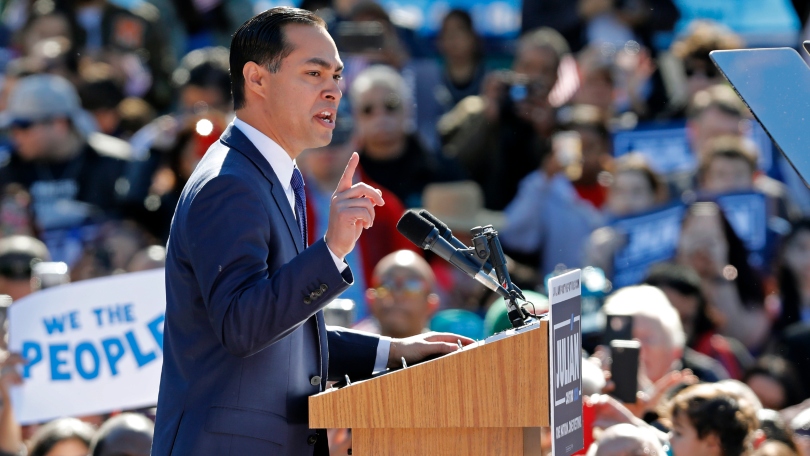 Then when I went to HUD, I continued that work and we did the most groundbreaking regulation since the Fair Housing Act called Affirmatively Furthering Fair Housing to help ensure that communities across the United States put more effort into breaking down barriers so that everybody in this country has access to opportunities, regardless of their skin tone.

TheGrio: There are many Black voters who have decided to align with former Vice President Joe Biden, for better or worse. How do you get those folks to change their minds?

Julián Castro: My approach has been to be bold and to blunt and to lay out the plan. You know, it’s true. I don’t have nearly the amount of resources that some of the other candidates have, but if you look at our campaign and look at some of the other campaigns, people can see the difference. We’re going to do everything that we can so that more people are able to make that comparison.

And, when people make the comparison, I believe I win.

TheGrio: There has been a lot of buzz around Bloomberg, especially since he apologized for implementing the Stop and Frisk policy in New York City, which unfairly targeted Black and Brown people. As a former mayor yourself, do you think he’s believable?

Julián Castro: I’ll take him at his word, although it is mighty convenient. My hope is that he’s going to delve into more detail about how he would change the problem that we have with policing in America especially when it concerns young Black men and women.

TheGrio: You were one of the first Democratic candidates to really support the idea of reparations. Is this an agenda that you would be committed to supporting, win or lose?

Julián Castro: Absolutely, but honestly I haven’t thought much beyond this election cycle. I have no Plan B right now at all, but I will say there are a number of issues, and that’s one of them, that I would gladly take forward and be a strong voice for in the years to come.

Wendy L. Wilson is the managing editor at theGrio. Follow her rants, raves, and reviews on Twitter @WendyLWilson_