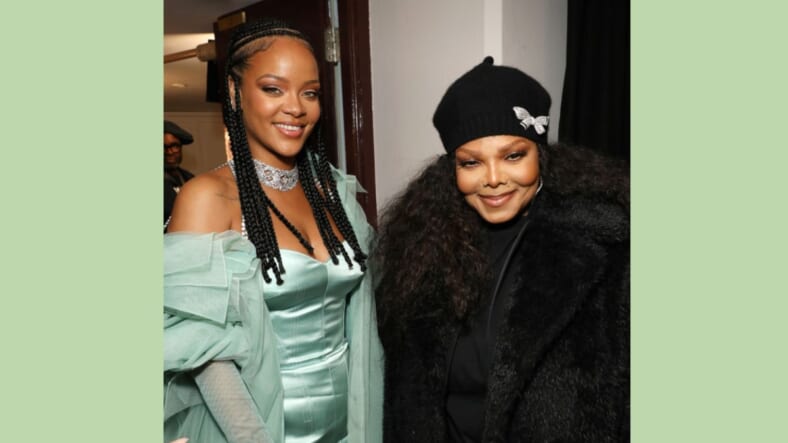 Rihanna and Janet Jackson were in the same place and at the same time and we weren’t there to witness it ourselves!

At the Fashion Awards in London’s Royal Albert Hall, the two icons, along with Tyler, the Creator, took the stage as Jackson presented Ri-Ri with the Urban Luxe Award for her fashion contributions to sportswear, according to Vogue.

“You are loved for your style,” Jackson told Rihanna.

The prize was created by the British Fashion Council as a way to honor fashion labels that raise the bar on casual fashion designs. It’s hard to believe, but this is Rihanna’s first fashion award for her Fenty fashion brand. Last year’s Urban Luxe Award was given to Virgil Abloh, the artistic director of Louis Vuitton’s men’s wear collection.

READ MORE: Add Rihanna to the list of Lizzo fans

During her acceptance speech, the 31-year old Bajan beauty thanked her collaborators and the British Fashion Council for the honor. In 2017, Rihanna was also nominated for her Fenty x Puma collection.

Also, taking home an award last night was model Naomi Campbell, who was given the prestigious Fashion Icon Award. Campbell choked back tears and said the award was “a deeply humbling experience.”

Fenty has made a major splash this year, rocked by celebrities ranging from Cardi B to Bella Hadid. Rihanna herself has gone far in carrying the brand to the next level by wearing her own designs, including her choice for the awards show – a minty green minidress, with a translucent jacket.

Jackson, herself a musician and a fashion-forward icon, is someone who Rihanna sought to emulate early on.

“Janet Jackson, Destiny’s Child, Whitney Houston—they were the people who motivated me to do this, who I idolized and looked up to, and said I want to be like them,” Rihanna told MTV back in 2010.

“That started the dream, and it just went from there, and became a reality.”