Tina Tchen is all about standing up for women like Gabrielle Union who are bold enough to speak up and speak out.

Tina Tchen is the new CEO of Time’s Up, the advocacy organization founded by powerful women in Hollywood. Tchen is a lawyer and former chief of staff to Michelle Obama. (Photo courtesy of TIME’S UP Now)

If you strip actress/activist Gabrielle Union of her fortune, fame, and 14.6 million Instagram followers, her allegation of experiencing a toxic workplace culture isn’t at all different from what other Black women face each day. Union had the courage to stand up to giants in her industry willing to expose their wrongdoings she says occurred while working as a judge this season on NBC’s hit show, America’s Got Talent.

Union accused the show’s producers of firing her after she complained of having to endure racist jokes told backstage and onset. Then there is the insinuation that her hairstyles were “too Black” for the show’s audience. In retaliation for her speaking up, NBC terminated her contract. Now, the network is being called out for issuing a “we’ll do better next time” statement instead of a genuine apology to Union.

Several celebrities, mostly white women allies, have come to Union’s defense as well as SAG-AFTRA, the labor union representing most professionals in Hollywood. There is, however, one organization fully equipped to deal with these exact types of situations.

READ MORE: Gabrielle Union claps back after ‘America’s Got Talent’ releases lackluster statement but no apology

Enter Tina Tchen, the new powerhouse president and CEO of TIME’S UP Now, which was birthed less than two years ago in the aftermath of Tarana Burke’s #MeToo Movement by several Hollywood A-listers in response to the rampant sexual harassment claims brought against Harvey Weinestein.

Tchen, an attorney who served as Assistant to former President Barak Obama, Chief of Staff to former First Lady Michelle Obama and the former Executive Director of the White House Council on Women and Girls, has only been on the job for less than 90 days. However, she has already sanctioned a TIME’S UP Now petition strongly urging NBCUniversal to take Union’s accusations seriously and do what is necessary to create a safe and equitable workplace for all.

In a statement, Tchen provides unwavering support for Union and boldly calls out NBCUniversal for their problematic pattern of protecting men at the expense of women.

“[Gabrielle] Union’s experience shows that NBCUniversal still has a lot of work to do to change its culture so discrimination, harassment, and retaliation are no longer tolerated at the company. Building a culture of safety and equity requires continuous, intentional work sustained over a long period of time –  even when a company isn’t in the throes of a crisis.

“Ensuring people of all kinds are respected and supported at work is critical for any company, but especially a media company like NBC that has such an outsized influence in our culture and in our lives.”

In an interview with theGrio, Tchen discusses why TIME’S UP Now is busier than ever, what focus is being put in place to protect Black women, and the response from her former boss, Michelle Obama, on starting this new job.

TheGrio: For those people who don’t already know what exactly does TIME’S UP Now do and what’s involved in your role as president and CEO?

Tina Tchen: TIME’S UP NOW is an advocacy organization that has quickly expanded beyond just the entertainment industry and not just about women with a platform, means and who are recognizable. It now also includes women across industries who may be low-income women, women of color, disabled women, LGBTQ+ workers, with the goal that everyone is entitled to have a workplace where they are treated with respect, they are safe and they are able to reach their full potential.

My personal involvement started early on because I just happened to be in Los Angeles at the right moment and called into a meeting as these women were just starting to form together this idea of building a movement. It became clear that we needed a legal defense fund because the women who were speaking out in response to the #MeToo movement were finding themselves being threatened with defamation suits by the rich, powerful men they were accusing. We needed to provide support to these women in the form of a legal defense fund so that they would not be silenced.

READ MORE: Anita Hill says she could vote for Joe Biden if he becomes the nominee in 2020

TheGrio: Can you tell us more about the TIME’S UP NOW Legal Defense Fund and who has access to use it?

Tina Tchen: I can tell you the story of Malin DeVoe, who was a hotel cook in Pennsylvania who complained about the sexual harassment she was experiencing from a hotel engineer at her job. When she went to her manager to complain about him, her manager fired her. Then she saw Oprah Winfrey give her amazing speech at the 2018 Golden Globe Awards where she said, ‘time is up.’ Malin reached out and called the Legal Defense Fund and became one of our early clients after we connected her with legal resources. 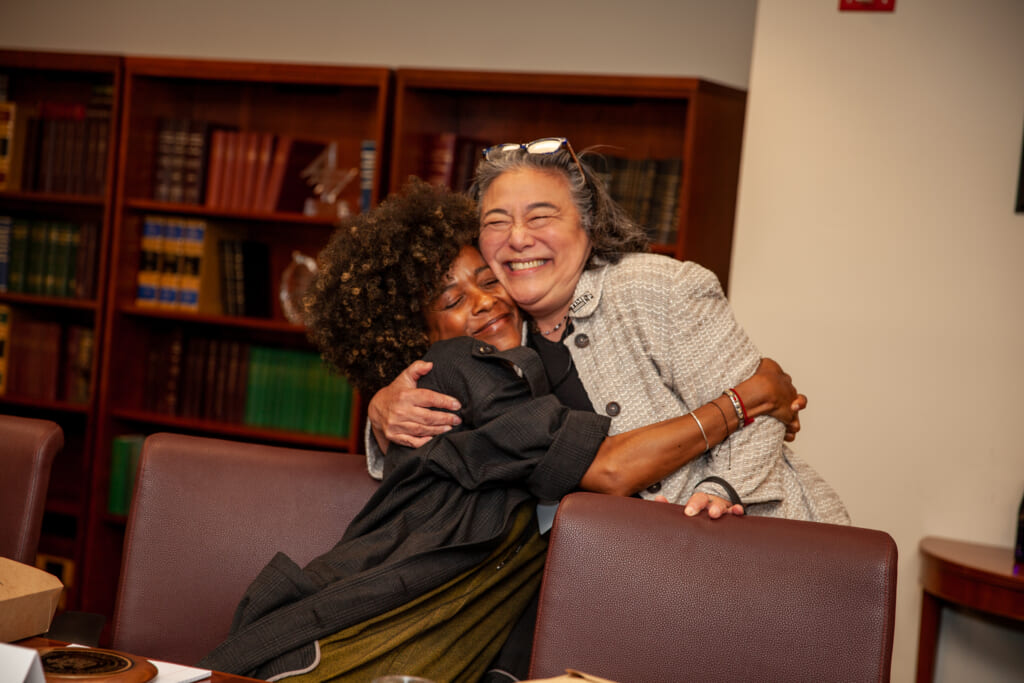 Fairly recently, she received a settlement from her employer, but this is exactly what the Legal Defense Fund was set up to do. To date, we have 3,700 people with legal or PR support and of those two-thirds are low-income workers, so this is really reaching the people we hoped it would reach.

TheGrio: You also have the TIME’S UP Impact Lab, a new innovation center that helps navigate changing toxic workplace cultures and how to make it a part of a company’s strategic plan, but how do you actually get CEO’s to commit to making the switch?

Tina Tchen: I have been doing this work for a long time, about three decades, and it has been three decades since sexual harassment was made illegal under federal employment law by the Supreme Court. And, yet here we are. What we’ve been doing for the last three decades has been insufficient and so what we hope the TIME’S UP Impact Lab will do is do the research and collect the data that can help inform what will work. What new policies and practices can we model? What public policy will move the dial? Is there new technology that can help us as Is there behavioral science research on what will change people’s social norms and behaviors that we can use to actually implement best practices within companies?

TheGrio: A study produced earlier this year on race, threat, and workplace sexual harassment shows that Black women are much more likely than their white counterparts to report being sexually harassed. What is TIME’S UP NOW doing to specifically support Black women?

Tina Tchen: Absolutely. We do know that Black women are filing harassment charges at the EEOC at a rate of three times that of non-Hispanic women. That’s not just because they are more willing to report, but it’s that they are experiencing it more. The more you are unlike the power structure that you are working in, the more you are subject to exclusionary, discriminatory and harassing behavior.

From day one, everyone who came together to form TIME’S UP, we were very aware of the intersectional nature of discrimination and harassment and lack of power and the differential ways in which we need to address that. Very early on women of color in Hollywood came together to speak out about their issues and we have continued to make that a core organizing principle for TIMES UP.

TheGrio: How has your former boss, Michelle Obama, helped you in this role? Any words of support?

Tina Tchen: She’s a wonderful friend and my forever boss. She was very publicly encouraging on the day of my announcement so I’m really grateful for that.

You now, our motto within the Obama administration had been to make sure that we as federal employers acted as a model employer. I hope we can get back to a stage where the federal government models the best behaviors and the best workplaces for the rest of the country.

I’m thrilled that @TIMESUPNOW named @TinaTchen—one of the most brilliant and purposeful leaders I’ve ever worked with—as its new president and CEO. I’ve seen how Tina’s hustle and intellect can transform policies and touch lives, and I can’t wait to see her thrive in this role! https://t.co/iWxPIaRQv0

Wendy L. Wilson is the managing editor of theGrio. You can follow her rants, raves, and reviews on Twitter @WendyLWilson_