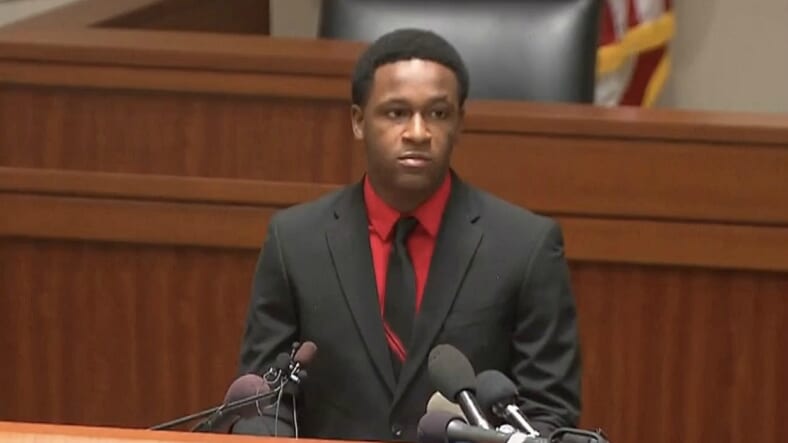 Brandt Jean receives the Ethical Courage award from the Dallas-area The Institute for Law Enforcement Administration. (CBS Dallas-Fort Worth)

Back in October Brandt Jean made headlines after he chose to hug Amber Guyger after she received a 10-year sentence for the murder of his brother Botham Jean. Now he has received an award from a law enforcement organization for his “display of empathy and forgiveness.”

According to CBS Dallas-Fort Worth, Tuesday, The Institute for Law Enforcement Administration gave the 18-year-old who has been the topic of debate since he made the controversial decision to embrace his brother’s killer just 24 hours after her conviction.

While Gregory Smith, the director of the Dallas-area institute, said Jean’s actions have helped the community heal, Jean himself admitted that it was difficult accepting the award from a police training group since he believes that it was actually a lack of proper training that lead to his brother’s death.

“I am honored to accept it on behalf of my brother Botham Shem Jean, who was an example of ethical leadership,” he said during the ceremony in Plano, Texas.

“I never intended for the statement I made to the person that murdered my brother to receive such international recognition,” he continued. “To be honest, I struggled with it for a long time as I struggled with accepting this award from this agency.”

“My brother was well aware of the danger posed to young Black men by police,” he noted before conceding that his hug with Guyger was as much for his benefit as hers.

“After being found guilty by a jury of her peers, sentenced under the law, Ms. Guyger needed to be forgiven, and I needed to be free from the burden of unforgivenness,” explained Jean.

Then, taking the police to task and not forgetting that his brother was slain by a cop, he urged the officers in the room to think twice before taking actions that could lead to the death of another innocent victim.

READ MORE: Botham Jean’s father says he could befriend the woman who killed his son

“I want you all to know that I am not a threat — that young black males are not inherently dangerous or criminal. I implore you to champion the causes and procedures that amplify the value of all lives,” implored the teen. “I don’t want police officers to continue doing this. As you can see, it’s not healthy, especially for the Black community, Black males specifically. We don’t want this to happen again. We want the training to be applied 24/7 because we citizens put our trust in those officers every day.

“I ask you to remember my brother, my example of ethical leadership,” he concluded. “A young, Black male that was perceived as a threat by one of your own. And when you remember him, I want you to ask yourself, ‘what are you doing to ensure that there’ll be  no other families like mine.”