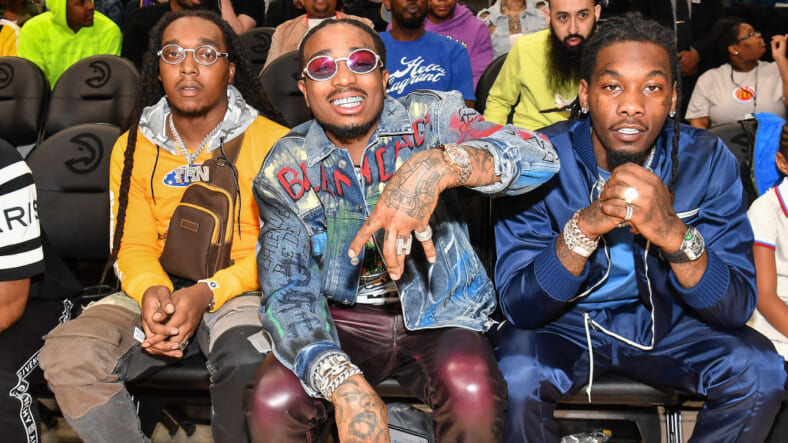 Rapper Quavo was captured on video throwing punches at a Paris nightclub during fashion week in an altercation that went to the left real quick.

According to TMZ, Thursday evening the rapper, who is one-third of the hip-hop group Migos, arrived at an after-party being held at the Palais Maillot nightclub. The gathering was meant to be a time to celebrate fell bandmate Offset’s Paris Fashion Week show. However, Quavo, 28, arrived well after both Offset and his wife Cardi B had left. But soon things took a violent turn for the worse.

READ MORE: Quavo jokes he’s selling Popeyes chicken sandwiches out of his trunk for $1K each

Witnesses claim that the drama initially started when security guards working the door didn’t recognize the “Fight Night” rapper and attempted to bar him from entering the venue. It took one of the dancers from Les Twins — the Black French duo best known for touring with Beyonce — speaking up for the confusion to be cleared up.

However, Quavo allegedly walked into the nightclub visibly insulted by the mixup and at some point allegedly struck a staff member. In the video, it also appears as if he accidentally hit the Les Twins dancer who was attempting to help him.

“The party was insane, so many people. With all the craziness, the security didn’t recognize him at the door,” the insider told Page Six. “[They] made him wait 10 minutes at the door like a nobody.”

“Some other idiot was trying to stick to Quavo on the way out and Quavo punched him,” the source continued, adding there were “too many fans screaming.”

READ MORE: Shaggy passed on appearing on Rihanna’s new album after being asked to audition

Some have speculated that because the entertainer didn’t have his personal security team with him that may be why he was on edge and felt the need to defend himself. But there appears to be a general consensus that it “wasn’t a real fight,” and instead “more of an altercation,” that left unsuspecting fans “a little shocked.”