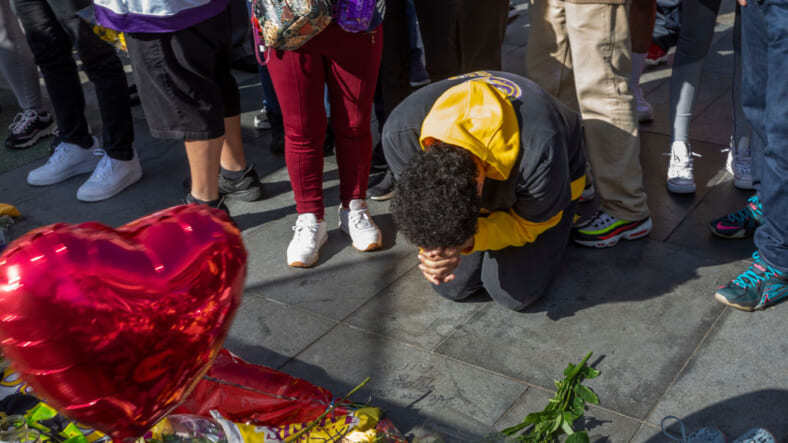 Fans grieve the loss of former NBA star Kobe Bryant and his daughter Gianna, who were killed in a helicopter crash in Calabasas, California, at L.A. Live, near the Staples Center on January 27, 2020 in Los Angeles, California. Nine people perished in the crash. (Photo by David McNew/Getty Images)

In the wake of Kobe Bryant and daughter Gianna’s deaths, a Super Bowl LIV  commercial starring Chrissy Teigen and John Legend was edited to omit a scene involving a helicopter.

The glitzy ad for Hyundai’s luxury vehicle brand Genesis’ first SUV, the Genesis GV80, will no longer include an opening shot of a helicopter. Earlier this week, the original cut of the full ad was posted but was then immediately replaced, as the company recognized some viewers could find it triggering in light of the recent crash which led to the loss of the NBA star, and his daughter, along with 7 other passengers.

“Today we re-cut our Super Bowl ad, to remove a stationary helicopter that was in the opening two seconds of the commercial,” a Genesis spokesperson told USA Today in an statement on Wednesday. “The ad had been filmed, produced and delivered well before Sunday’s tragedy, so we took down the spot out of compassion and sensitivity to the families.”

“Hard Rock is incredibly saddened by the news from this past weekend and sends deepest condolences to all those affected by this immense tragedy,” the company said in a statement.

On Thursday, NFL commissioner Roger Goodell confirmed Bryant is set to receive a special tribute during the 2020 Super Bowl in Miami this Sunday.