Jace Prescott, 31, was found dead in his Texas home. 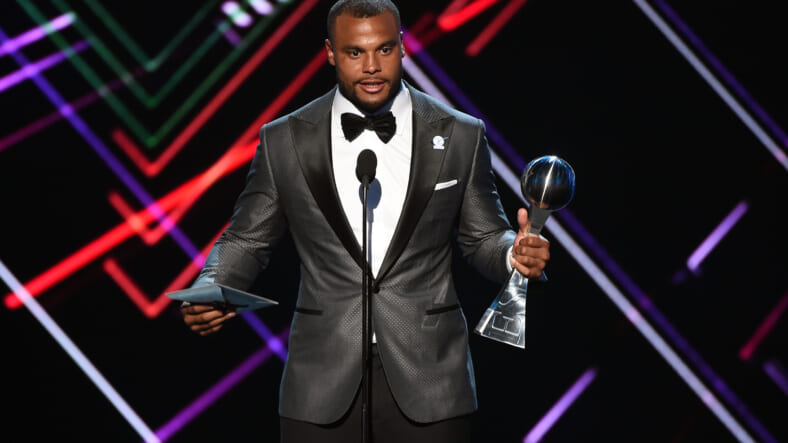 Just a day after Dallas Cowboys fans celebrated the signing of talented Oklahoma wideout CeeDee Lamb in the league’s first virtual NFL draft, the team and its fans are in mourning.

Dallas Cowboy’s quarterback Dak Prescott’s older brother, Jace Prescott, 31, has died, according to multiple reports. The Cowboys franchise player, who starred at Mississippi State University until he was drafted in 2016, was raised in Haughton, Louisiana. He is the middle son of Peggy and Nathaniel Prescott‘s three boys. Jace is the oldest.

The Dallas Cowboys share their deepest sympathies to Dak & his family for the loss of his brother.

“It is with great sadness and support that we share the news of the passing of Jace Prescott today,” the Cowboys said in a statement on their website. “The loss of Tad and Dak’s brother is devastating. At this incredibly difficult time, the Prescott family asks only for prayers and respect for their privacy.”

Condolences and prayers to the family of @NSUDemonsFB alum Jace Prescott. Great guy, humble and athletic yet a brute. Remember at Texas State, after they kicked a FG in OT, we ran the ball six straight times behind Jace and our OT Booker to win the game. #RIP pic.twitter.com/PY3LFHsQav

Jace died at his home in Orange, Texas, near the Louisiana border, reports The Fort Worth Star-Telegram. His uncle Phillip Ebarb, says his Jace’s girlfriend was in the home at the time.

“It’s the worst day of my life, all of our lives,” Ebarb told the Star-Telegram. “We’re all freaking devastated.”

All three brothers appeared in a popular Chunky soup commercial that ran regularly during the 2019-2020 football season.

“We are so saddened that Dak has lost his brother,” Cowboys owner Jerry Jones said during a virtual draft press conference.

Dak posted a picture of him and his brothers sharing a laugh to his Twitter account last year.

Reliving what it was like growing up with the Prescott house with my brothers was a great experience… Welcome to the @campbellschunky #SoupSquad Jace & Tad! #FootballisFamily #Faith #Fight #Finish #FootballisFamily pic.twitter.com/Dyj19DJcf1

Tad Prescott posted this about his brothers last year.

Life wouldn’t be the same without them.

While no cause of death has yet been reported, some unverified online speculation says that Jace, whose Twitter has since been deleted, was having health problems, including hypertension that impacted his mobility and had been tweeting about his feelings of depression.

Prescott was criticized recently for a dinner party that he hosted with teammate Ezekiel Elliott, in spite of mandates on social distancing due to the COVID-19 pandemic, but it’s not known whether his brothers attended.